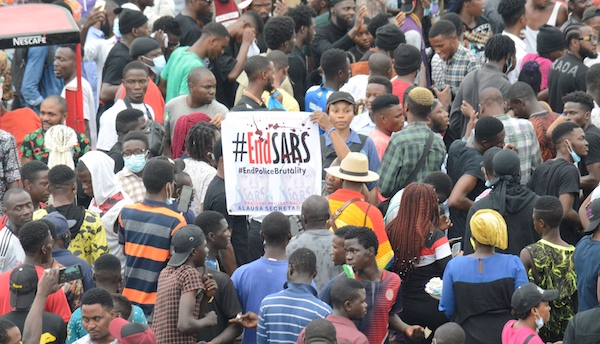 A police inspector in Edo State, Christiana Afekhai, has sought compensation for her car ‘vandalised’ during the #EndSARS protest.

She told the Edo State judicial panel of inquiry investigating rights violations by the police on Tuesday that the repair of the vandalised car was N800,000.

Mrs Afekhai said ”it will be out of place to ask the state government to buy her a new car when the vandalised car could still be fixed.”

The Edo police inspector told the panel that the hoodlums that hijacked the #EndSARS protest ”punctured the four tyres of her vehicle, broke the windscreen, and made away with the battery where it was parked at the Ugbekun Police Station in Benin”.

“Where I parked the vehicle at the Ugbekun Police Station, the hoodlums who hijacked the #EndSARS protest, punctured the four tyres of the vehicle, broke the windscreen and made away with the battery,” she said.

Members of the panel, led by Ada Ehigiamusoe, resolved to visit the mechanic workshop where the vehicle is undergoing some repairs to ascertain the cost of the damage.

For two weeks several Nigerian Youth in October with the mantra #EndSARS, took to the streets to demand an end to police brutality metted out by the members of the Special Anti-Robbery Squad (SARS).