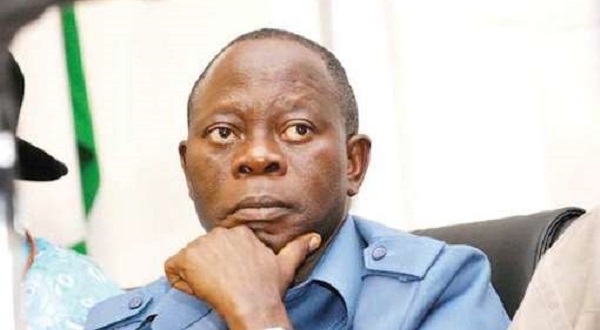 Centre for Anti-Corruption and Open Leadership (CACOL) has called on the Economic and Financial Crimes Commission (EFCC) to probe allegations of fraud against the National Chairman of the All Progressives Congress (APC), Adams Oshiomhole.

The group said EFCC’s investigation of allegations against Oshiomhole will help debunk rumours that President Muhammadu Buhari APC led-Federal Government is only witch hunting members of the opposition while portraying members of the ruling party as saints in its anti-corruption mantra.

Ikenna Aghagbobi, CACOL’s Media and Publications Officer, stated this on behalf of the group’s Executive Chairman, Mr. Debo Adeniran, in a press release on Wednesday.

“Our call is based on a suit which was reportedly filed by Bishop Osadolor Ochei alleging that Oshiomhole while in office as Edo State governor, acquired property in United States of America, South Africa and Dubai worth billions of US dollars and far in excess of his legitimate income.

“He also alleged before the court that the ex-governor built a sprawling mansion worth more than N10b in his hometown, Iyamho, Edo State while in office.

“The Cleric also stated in the suit that he had on November 4, 2016, sent a petition to the EFCC narrating some corrupt practices the ex-governor was involved in,” the release said.

CACOL noted that the failure of the EFCC to act on petitions containing “weighty allegations” against Oshiomhole, was contrary to Section 15(5) of the 1999 Constitution (as amended) which enjoined the State to abolish corrupt practices.

On why the EFCC has to urgently probe Oshiomhole, the release said, “The rumours which have been making the rounds indicating that the present administration has been witch hunting members of the opposition while portraying members of the ruling All Progressives Congress (APC) as saints need to be debunked by the EFCC.

“How can a body whose sole obligation is to investigate and prosecute anyone indicted of a corruption crime be reluctant to carry out its statutory assignment against suspects or dismissing these allegations if they are found to lack substance?

READ ALSO: 2019: More trouble for APC as court nullifies election of its Gov candidate, others

“Although it is shameful that the EFCC would need to be reminded to investigate allegations levelled against Oshiomhole, we recall that several officials of the Federal Government who have been exposed for committing forgery and other crimes are still being treated with kid gloves. This is the major problem we have in our fight against corruption.

“While we urge the EFCC to initiate a diligent probe on the weighty allegation of funds diversion and misappropriation against the APC Chairman, we challenge Oshiomhole to debunk these allegations and take whatever steps he considers necessary if these allegations are untrue as this will set an example worth emulating.”

A Federal High Court siting in Abuja and presided over by Hon. Justice A.I. Chikere, had ordered Bishop Ochei, an activist, to serve EFCC and Oshiomhole with his application to the Court for leave to issue an order of Mandamus on EFCC to arrest and investigate Oshiomhole upon allegations of corruption, within 5 days from October 9, 2018.

The case has been adjourned to 23rd October, 2018 for arguments from all the parties.

Why didn’t you write PDP about Kano? We must present candidates for Zamfara, Oshiomhole replies INEC