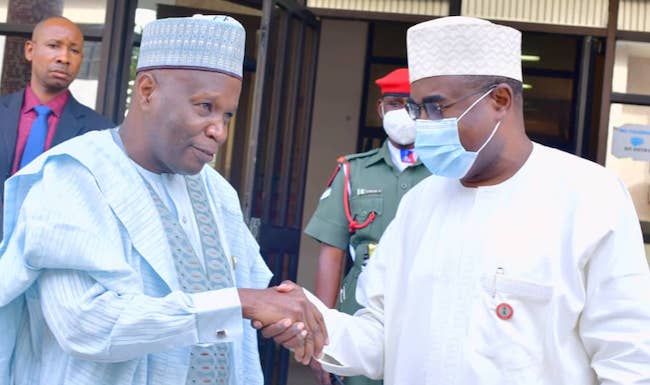 The Gombe State Governor, Inuwa Yahaya, on Tuesday established a strong correlation between the use of illicit drugs and the Boko Haram insurgency in the North-East.

The governor, who spoke with journalists during his visit to the Chairman and Chief Executive of the National Drugs Law Enforcement Agency (NDLEA), Brig. Gen. Buba Marwa (retd), at the agency’s headquarters in Abuja, said the use of illicit drugs distort human reasoning and psychology.

He also called for synergy between states and the NDLEA in order to rid the society of illicit drugs.

Yahaya said: “In the last two years, I saw a lot of development with regards to these issues and being the governor, naturally all issues tend to end up on my table and we can put a good percentage of all these negative developments including the Boko Haram insurgency in our society to issues that had to do with drugs.

“Gombe State which lies at the centre in the North-East is now a transit route for drugs and sometimes even weapons. I have made several trips to the Defence Headquarters here in Abuja where I met the Chief of Defence Staff and the Chief of Army Staff and eventually ended up seeing the National Security Adviser and Mr. President. I know when we have control over illicit drugs every other issues can be controlled as well.”

He commended the NDLEA on the success achieved in the fight against drug abuse in Nigeria.

In his response, Marwa said the North-East ranks fourth on drug abuse among the six geopolitical zones in the country with 13.6 percent prevalence rate.

He thanked governor Yahaya for partnering with the agency to combat the use of illicit drugs in the state.