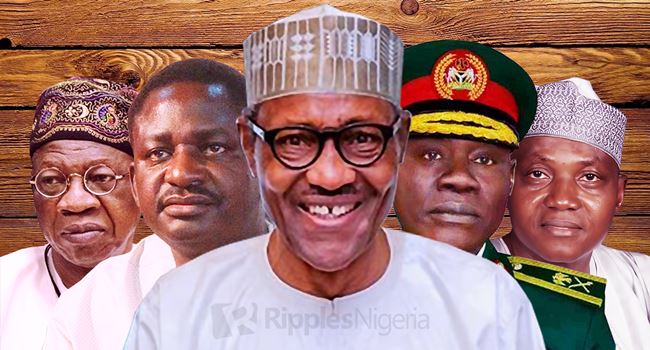 During the week in review, President Muhammadu Buhari failed to spring any surprises again when he announced the appointment of a core northerner, Maj. Gen. Farouk Yahaya, as the new Chief of Army Staff to replace Lt. Gen. Ibrahim Attahiru who died in a military plane crash on May 21.

Also during the week, Senior Special Assistant on Media to the President, Femi Adesina, reeled out the achievements of the administration in the last six years, but effectively avoided mentioning the major areas that have continued to cause consternation and worry in the nation.

We also tracked three other stories that kept the nation buzzing and ticking over.

Enjoy the offering till we come your way again.

On May 27, President Muhammadu Buhari announced the appointment of Maj. Gen. Farouk Yahaya as the new Chief of Army Staff.

“The Commander in Chief of the Armed Forces of the Federal Republic of Nigeria, President Muhammadu Buhari has appointed Major General Farouk Yahaya as the new Chief of Army Staff.

“Prior to his appointment Major General Yahaya was the General Officer Commanding 1 Division of the Nigerian Army and the incumbent Theatre Commander of the Counter Terrorism Counter Insurgency military outfit in the North East code named Operation Hadin Kai.”

The appointment of Yahaya as the new COAS once again illustrates the President’s penchant to neglect the federal character principle as enshrined in the constitution.

The action, executed without any concern for inclusivity in the country’s military hierarchy, heightens the feeling of marginalization, especially by people of the South-East.

That Yahaya was elevated over and above his seniors is a clear indication that the President was not only willing to sacrifice a whole generation of officers but ready to damn the implications it may have for the war efforts which call for more experienced men than a thinning down of the fighting team.

On May 28, the Special Assistant to the President on Media and Publicity, Femi Adesina, posted a long list of President Buhari’s achievements in six years and made it clear that Nigerians will clap for him by the time he leaves office in 2023.

In the piece titled “The Buhari Administration at 6: Counting the Blessings One by One,” Adesina listed the President’s achievements in the last six years, saying:

“The Muhammadu Buhari administration clocks six years on May 29, 2021. This milestone affords the opportunity to reflect, and recount the impact that has been made (and is being made) on different sectors of national life.

“Some people claim: ‘We don’t see what they are doing. We don’t hear about it.’ When the administration breasts the tape in another two years, by the grace of God, the applause will be resounding, even from the worst of skeptics,” he said.

In being clever by half, Femi Adesina carefully circumvented the sorest of points that have seen the Nigerian polity fragmented and on the edge of anarchy following the unbearable security situation leading to calls for separation and secession from sections part of the country.

The long list of accomplishments not withstanding, the fact that the administration has woefully failed to contend with the challenge of protecting lives and property should worry even the most ardent of supporters.

Read also: QuickRead: Adesina’s daring romance with Man City. Other stories we tracked and why they matter

That ethnic war lords are raising separatist flags in some parts of the country and expanding the frontiers of mind control is a clear indication that the country’s unity may be significantly threatened as claims of inequality and injustice persist among its federating units.

On May 27, President Muhammadu Buhari made another of his now customary promises when he vowed to end abduction of school children, child abuse and killing of Nigerians in every part of the country in the shortest time.

Represented by the FCT Minister, Mohammed Bello, at the 2021 National Children’s Day celebrations, Buhari said his administration was committed to ensuring that all children were protected from incessant attacks, kidnappings, killings and abuse.

“One of such interventions is my commitment to the “Safe Schools Declaration (SSD)” which I ratified in 2019 to ensure the government of Nigeria puts in place a national policy that would guide its implementation nationwide.”

The spate of abductions of school children without a sustainable solution in sight makes Buhari’s recent promises sound more rhetorical than real.

Unless concrete steps are taken to guarantee security around schools, especially those in northern Nigeria, and clear evidence seen of shut schools being reopened, the claim to getting 10 million children back to school in 10 years must be considered a mirage.

On May 28, Minister for Information and Culture, Lai Mohammed assured Nigerians that despite the security challenges facing the country, Nigeria is in safe hands with President Buhari at the helms of affair.

Mohammed who made the claim when he received the Oluyin of Iyin-Ekiti, His Royal Majesty, Oba Adeola Adeniyi Ajakaiye, in Abuja, said:

“Talking about security, I want to use this opportunity to assure all Nigerians that despite the security challenges we are facing now, Nigeria is in safe hands. We must never succumb to the apocalyptic or doomsday predictions about our country because they won’t come to pass.”

In assuring Nigerians that dooms day predictions will not come pass, the minister is basically discharging a responsibility for which he is paid for.

Ordinarily, a promise by government should raise hope but it is doubtful if Lai’s statements engender any confidence.

The hard realities speak to growing insecurity and no amount of pampering the issue will do except citizens begin to feel sufficiently free to move around without fear of violence being visited on them.

The future, indeed, appears bleak if the trend of wanton bloodletting does not cease.

On May 26, the Presidency tried to justify why President Buhari did not attend the burial of the late Chief of Army Staff, Lt. Gen. Ibrahim Attahiru which held in Abuja on Friday, May 22.

In a media chat, the Senior Special Assistant on Media and Publicity to the President, Garba Shehu, offered what he thought were the reasons Buhari did not show up at the burial of the late COAS and 10 other military officers who perished in a military plane crash a day earlier.

He said, “I was in Europe myself on assignment and I have not spoken to the president on this but let me give you just one example: the president is somebody who is so concerned about the safety and wellbeing of ordinary Nigerians on the streets.

“Do you know why he now prays his Juma’at in the state house and doesn’t go to the national mosque? Because he doesn’t like this idea of closing roads, security men molesting people on the road for the President to have the right of way.

“These are small things for many people but they are important for President Muhammadu Buhari. So, it is a mourning situation and the president didn’t want to take away attention from that,” Shehu said.

The lame excuse offered by the Presidency is clearly indicative of the fact that it had no tangible reasons in defense of Buhari’s disposition to the burial rites of the country’s late Army Chief.

The failings, therefore, portray a Presidency out of tune with the concept of emotional intelligence.

This seeming disregard for empathy would most likely dominate national discourse for some time to come, and create serious concerns for how citizens perceive their reward for supreme loyalty to the country.

QuickRead: Buhari and ‘Civil War’ goof. Four other stories we tracked and why they matter

QucikRead: Lai’s sizzling discoveries. Four other stories we tracked and why they matter