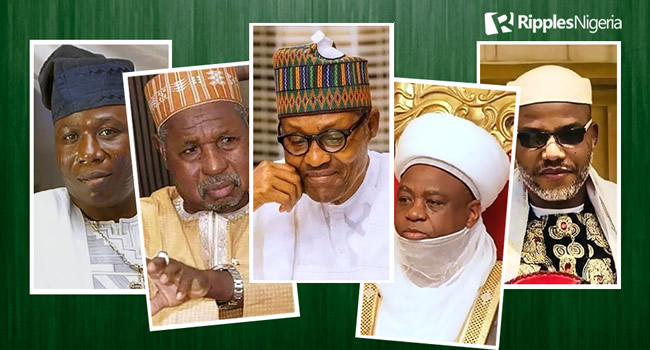 In the week under review, the Federal Government announced the capture and repatriation of the leader of the proscribed Igbo separatist group, Indigenous People of Biafra (IPOB), Nnamdi Kanu, in an unnamed territory, ending a two-year manhunt for the fugitive.

The DSS also did the unthinkable by invading the home of self-proclaimed Yoruba Nation activist and freedom fighter, Sunday Igboho, where two people were reportedly killed while scores were arrested but the man in the eyes of the storm managed to escape.

We also tracked three other stories that got tongues wagging during the week.

On June 29, Nigerians were treated to a Gestapo-like scenario when the leader of the Indigenous People of Biafra (IPOB), Nnamdi Kanu, was arrested in Kenya and repatriated to the country after being on the run for about two years.

Minister of Information and Culture, Lai Mohammed, who addressed a press conference on the arrest of Kanu, said:

“As you are aware, the leader of the proscribed Indigenous People of Biafra (IPOB), Mr. Nnamdi Kanu, has been rearrested and repatriated to Nigeria to resume his trial.

“Kanu, who is facing an 11-count charge of treason, treasonable felony, terrorism and illegal possession of firearms, among others, jumped bail in 2017 and left the country.”
READ ALSO: QuickRead: Soyinka drags Buhari to the slaughter. Four other stories we tracked and why they matter

Why it matters
The rearrest of Nnamdi Kanu looks to have given the Buhari-led administration a major image boost as it lifts the sagging reputation of the intelligence gathering arm of Nigeria’s military and secret police.

While Kanu may yet have his day in court, his rearrest does not offer any guarantees of an end to the clamour for an independent nation state of Biafra.

Indeed, this could prove to be a pyrrhic victory for the Nigerian government, especially if it continues to tow the path of injustice in harvesting the relationship between and among the country’s federating units while ignoring rising calls for honest conversations on the Nigerian project.

On July 2, the Department of State Services (DSS) invaded the home of self-styled Yoruba Nation activist, Sunday Adeyemo, popularly known as Sunday Igboho, in the dead of night.

The DSS operatives reportedly accused Igboho and his associates of planning a violent insurrection against the state.

During the raid at Igboho’s residence at Soka area of Ibadan, Oyo State, two people were killed, several others arrested while Igboho managed to escape.

Why it matters
The invasion of Igboho’s house has once again shown that the APC-controlled government, led by Buhari, is acting desperately in its quest to muzzle dissenting voices.

Coming barely days after the rearrest of IPOB leader, Nnamdi Kanu, and government’s strident moves to gag the media through legislations, Nigerians should be concerned about the country’s descent into a fascist state.

Again, as has been argued earlier, devoid of semblance of justice, equity and fairness in the management of the country’s affairs, citizens must brace for rising tension, political and economic instability.

On June 29, the Sultan of Sokoto, Muhammad Sa’ad Abubakar, dished a bitter pill on those he refered to as ‘tribal politicians,’ warning them to desist from acts that are tearing the country apart under different guises.

At a retreat organised by the Northern Caucus of the House of Representatives in Abuja, the Sultan said:

“We must abhor laws that are capable of causing inter-tribal or inter-regional disharmony. All men are created equal and the unity of Nigeria is sacrosanct.”

Why it matters
Considering the influence the Sultan wields in northern Nigeria and amongst Muslims, his call for unity comes at an auspicious time in the nation’s history, with insecurity and secessionist agitations threatening to rend the country apart.

While the Sultan’s appeal might sound idealistic, his claims to unity of Nigeria being sacrosanct is one that has been seriously interrogated.

While unity is desired, it must be said that only peace of the grave can be attained unless the structures that promote injustice are pulled down.
Nigeria’s unity can, indeed, be negotiated.

On June 27, President Buhari dismissed threats issued by a militant group, the Niger Delta Avengers (NDA), to resume hostilities in the oil-rich region, saying they were not necessary.

In a statement on his behalf by Special Adviser on Media and Publicity, Femi Adesina, Buhari said the NDA’s threats were uncalled for as he had addressed most of the issues raised by the group.

“It is curious that the threat was coming less than 48 hours after President Muhammadu Buhari met with the leadership of the Niger Delta and Ijaw National Congress (INC), at the Presidential Villa, and the germane issues had been responded to, especially call for restructuring of the Federation,” part of the statement said.

Why it matters
The dismissal of the threat posed by the Niger Delta Avengers is typical of the administration’s laissez-faire approach that permits issues to fester before addressing them.

The muscle-flexing by government notwithstanding, it must come to terms with the fact that recent clamour by militants, especially over the non-composition of the Niger Delta Development Commission (NDDC) board, is not only genuine but could worsen rising tensions and blight prospects for economic growth and stability.

Dialogue would certainly be cheaper than going to war.

On June 27, the Governor of Katsina State, Aminu Bello Masari, called on inhabitants of the state to defend themselves against bandits as the criminals are not spirits.

While commissioning security equipments he donated to the state police, Masari said Nigerians should not rely on security agencies alone to solve the problems of insecurity in their locations.

“Every bandit, every criminal has an address, has a location, and they’re human beings like us. The only difference is that they’ve taken arms against us; does it mean we’ve nothing to take against them?” Masari admonished.

Why it matters
Masari, by his call, re-echoes the sentiments once expressed by the Defence Minister, Bashir Magashi who told Nigerians to stand up against bandits.

Though welcome, Masari conveniently forgets that the primary responsibility of government is to protect lives and property, and that ordinary Nigerians can do little without access to means of coercion .

Staying pretentious and refusing to pursue the path of a radical review of Nigeria’s security architecture, Governor Masari and his ilk are only sowing seeds of anarchy and encouraging the country’s gradual descent into a failed state.

ICYMI…QuickRead: Onochie’s punctured lies. Four other stories we tracked and why they matter

QuickRead: Lawan’s grim revelations. Four other stories we tracked and why they matter