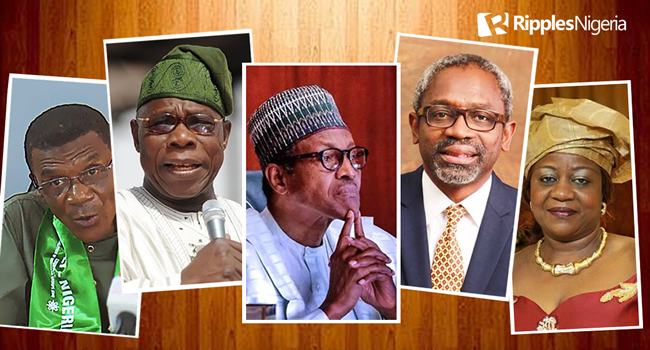 The week in review threw up another round of intriguing and vexatious issues that kept Nigerians talking.

Prominent among the lot, as the 2023 elections gear up to be a fascinating spectacle, was the nomination and screening of President Muhammadu Buhari’s aide, Lauretta Onochie, as a commissioner for the Independent National Electoral Commission (INEC).

Also during the week, former President Olusegun Obasanjo debunked stories that he was teaming up with some ex-governors to float a new party ahead of the 2023 polls.

We tracked these and three other stories that made Nigerians ticking over.

On July 9, during her screening by the Senate Committee on INEC, Lauretta Onochie, denied being a member of the All Progressives Congress (APC).

“Since 2019, I have not been a member of any political party in this country,” Onochie said responding to questions from members of the committee.

But a fact-check conducted by Ripples Nigeria showed that she was still tweeting in favour of APC as late as June 2020. Also, an affidavit sworn to by her went viral. She had said:
“That I am also engaged in active politics… That I am also a member of the All Progressives Congress and a volunteer at the Buhari Support Organisation.”

Why it matters
With an already-skeptical populace fearing the worse ahead of the 2023 elections, the nomination of Onochie by Buhari as an INEC Commissioner raises the bar of suspicion that the pending polls might be fraught with irregularities that would cast doubts on its outcomes.

In remaining obstinate about his choice, the President confirms what many consider a character flaw that seriously interrogates any claims to emotional intelligence and sensitivity to the overwhelming mood of the nation.

On July 5, former President Olusegun Obasanjo debunked stories making the rounds that he was set to form a political party ahead of the 2023 general elections.

In a statement by his media aide, Kehinde Akinyemi, Obasanjo, denied such plans:

Why it matters
Even with his denials, speculations around former President Obasanjo’s political moves cannot be shoved aside completely. And, the reasons are legion.

READ ALSO:ick readQuickRead: Kanu’s ‘capture’, Igboho’s escape. Three other stories we tracked and why they matter

The typical Nigerian politicians cannot be totally trusted as they have often been caught speaking from both sides of the mouth. Obasanjo is not an exception, and nothing suggests that he may have been weaned of this malaise lately.

It may be safer to watch Obasanjo’s deft political moves closely for he is never too far away from the country’s crisis of leadership and its ever flawed recruitment processes.

On July 7, the House of Representatives presented a bill seeking a five-year-jail term for ‘unlawful protesters’ in the country for consideration.

The proposed bill which seeks to jail ‘unlawful’ protesters stipulates that any person who takes part in a riot is guilty of a felony and is liable to imprisonment for three years.

“Any person who takes part in a mob action is guilty of a felony and is liable to imprisonment for five years,” it said.

Why it matters
The move to legislate against so-called ‘unlawful protests’ is a desperate initiative to stop citizens from demanding transparency and accountability in governance.

It seeks to suppress a constitutionally-resolved matter which guarantees the rights of Nigerians to speak up against bad governance.

Whilst there is a legitimate reason to promulgate laws against breakdown of law and order, it would be a big surprises if civil society groups allow enactment of the bill and encourage a descent into facism and dictatorship.

On July 8, the Presidency revealed why it was necessary to quell secessionist agitations across the country in the wake of a DSS raid on Sunday Igboho’s residence in Ibadan.

Femi Adesina, the Presidential media aide, in a published article wrote:
“President Muhammadu Buhari don vex. Troublers of Nigeria are in trouble and are being given bloody noses: insurgents, bandits, secessionists, all violent criminals… challenges are being frontally confronted, with the criminals ‘being sent to God to account for their crimes.”

Why it matters
Ignoring the latent malcontent that birthed the various secessionist agitations across the country, is to play the ostrich, pretend all is well, and dump the responsibility of building a society founded on equity, fairness and justice.

Threatening a violent elimination of voices of dissent while doing nothing to redress the underlying causes of disaffection, through honest conversations that would engender inclusivity, is to deepen the crisis of national confidence.

Nigeria must brace for rising tension and political instability unless the virtues of justice, equity and fairness are enthroned as national values.

5. Much ado about zoning

On July 7, the Coalition of Northern Groups (CNG) rejected the resolution of the Southern Governors Forum (SGF) for the 2023 Presidency to be zoned to the south, saying such a move is undemocratic.

CNG through its spokesperson, Abdul-Azeez Suleiman, also accused the Southern governors of ganging up against the North.

“The call for a rotation system is clearly aimed at achieving dubious political goals and one clearly designed to weaken the North.

“The Southern governors’ resolutions have further exposed a deliberate attempt to impose a contentious system of a rotational presidency that turns all democratic norms and accepted indices of our national demography on their heads,” he said.

READ ALSO: QuickRead: Soyinka drags Buhari to the slaughter. Four other stories we tracked and why they matter

Why it matters
The stance of some northern politicians on zoning the 2023 presidency to the south further highlights the country’s fault lines.

It shows, among others, how ethnicity and religion have become strong divisive elements in conditioning power distribution and allocation of resources between and among the country’s federating units.

And, in the most pathetic manner, it highlights everything that is wrong with Nigeria’s leadership recruitment process where merit, excellence are sacrificed on the altar of ethnicity and religious beliefs.

QuickRead: Pretentious warriors for democracy. Four other stories we tracked and why they matter

QuickRead: Kanu’s ‘capture’, Igboho’s escape. Three other stories we tracked and why they matter