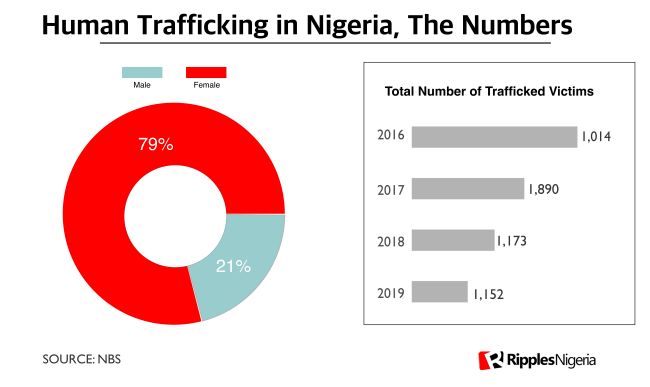 In four years, no fewer than 5,229 Nigerians have been reported as victims of human trafficking.

Out of this number, children between the age of 1- 11 represent almost one quarter of the number of trafficked victims.

These numbers were gleaned from the National Bureau of Statistics’ recent demographic figures published on its website with the data provided by the National Agency for the Prohibition of Trafficking in Persons (NAPTIP).

The report disclosed that during the period under review, 971 children (aged 1-11) were reported to be victims with 524 females and 447 males.

Breakdown of the numbers

From the figures, the most reported victims are those in the age of 18 years and above.

This age group accounts for more than half of the total trafficked persons.

At least seven out of every ten trafficked victims are female. The number of females trafficked over the four-year period is four times that of males.

NBS report established that female folks were predominantly trafficked for prostitution over the years.

The reported cases of trafficking in persons for prostitution was more in 2017 with 902 females and 12 males, followed by 485 for females and 2 males in 2019.

Read also: RipplesMetrics: 492 days to 2023 polls, here are disturbing stats that may influence electoral frauds in some states

The lowest reported cases for trafficking in persons for prostitution were recorded in 2016.

How the victims are trafficked

NBS, quoting NAPTIP, reveals the victims were trafficked out of the country from Benin Republic, followed by Togo, Ghana and Niger Republic.

Key takes from the numbers

Nigeria’s human trafficking victims are on the decline but there is so much work to be done.

Another key take takeaway is that girls remain the most vulnerable group and are mostly used for prostitution.

For the most, Nigeria’s borders with neighbouring countries remain poorly policed, while poverty has also served toe exacerbate the crisis.

RipplesMetrics: 492 days to 2023 polls, here are disturbing stats that may influence electoral frauds in some states