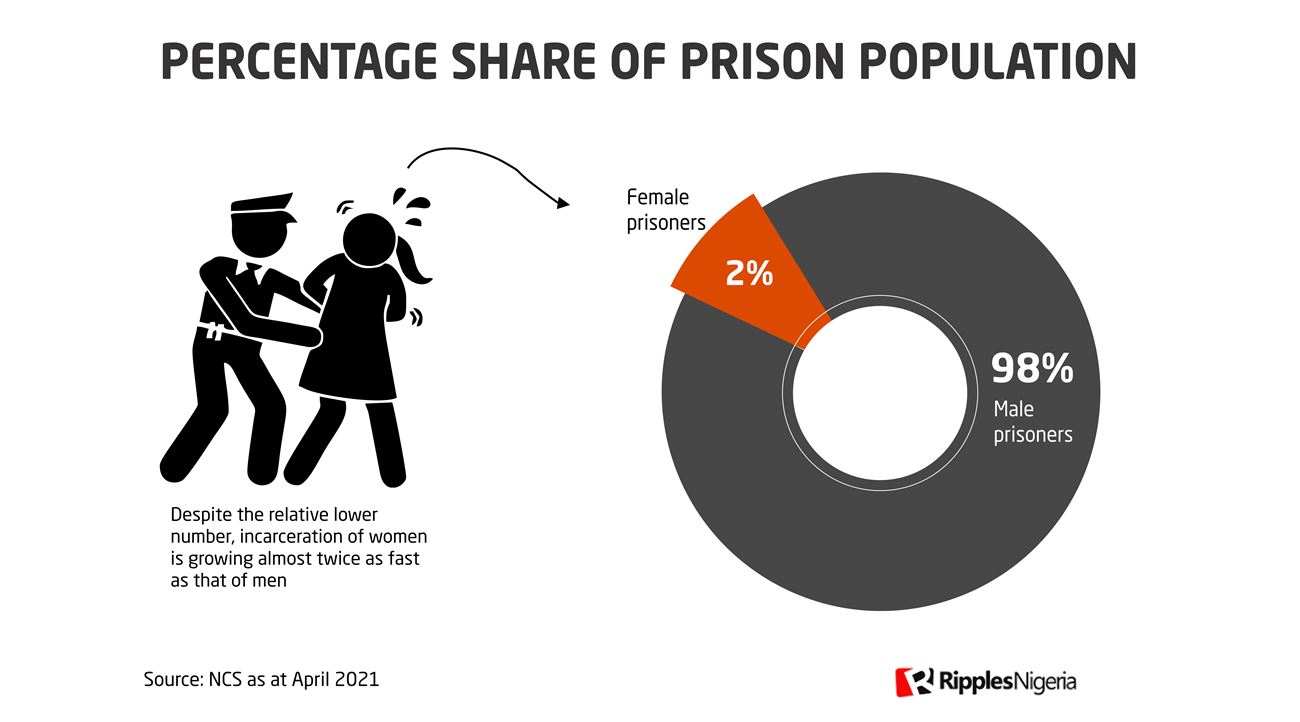 The increase of women in Nigerian prisons has far surpassed the growth of male prisoners in the last 20 years.

This is according to data from the Nigerian Correctional service (NCS) and World Prison Brief analysed by Ripples Nigeria.

Among the 1,210 women incarcerated, 298 have been convicted while 912 are still awaiting trial.

From the above figures, clearly, men still make up the majority of prisoners in Nigeria, far exceeding that of the female prisoners.

In World Prison Brief data, referencing the official website of Nigeria prison service, as at year 2000, the number of female inmates were only 709 females.

Between 2000-2021, the rate of growth for female imprisonment has been twice as fast as men.

For instance, in 2000 the number of female prisoners were 706, which grew by 1.18 percent to 722 in five years. While the number of male during that same period fell by 10 percent.

In 2020, the World Prison brief report shows the number of female prisoners jumped again 22.4 percent to 1,415.

How ready are female prisons to accommodate more?

Kirikiri Prison, one of the two facilities in the country, has a capacity to accommodate 1,700 inmates, while Numan Old Prison in Adamawa, established in 2017, can keep an additional 400. Together, these two female prisons can accommodate 2,100 inmates.

Going by the growth rate in the number of females incarcerated, the Nigeria government might need to build new facilities soon or deal with similar congestion experienced at the male prisons in a few years time.

Nigeria vs rest of Africa

Other countries with high female prison populations include the Central African Republic (8.2 %), Rwanda (7.4%) and Kenya (6.7%).

Women, no doubt, remain in the minority in the numbers of prisoners in the country, but the rapid growth should come as a concern.

Not only are more and more women getting unemployed, there is still a struggle to educate and keep girls in schools.

In fact, Women unemployment rate is also higher than the national rate of 33.3 percent.

What this means is that, yearly, female population is becoming more exposed to being recruited by criminals and government must look into empowerment to stop the trend.

Explainer: From China to Brazil, all you need to know about Nigeria’s debts to countries