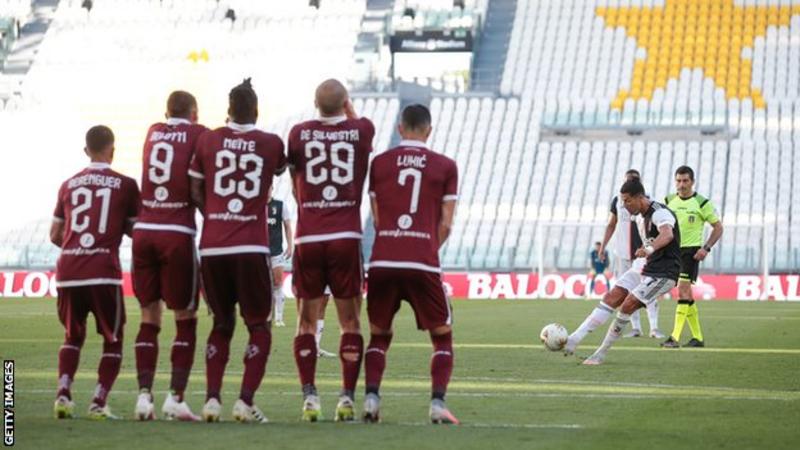 Portugal striker, Cristiano Ronaldo was on target for Juventus in their 4-1 victory over city rivals Torino in the Serie A on Saturday.

Paulo Dybala opened before Juan Cuadrado goal doubled the lead. Andrea Belotti then pulled one back for the visitors before Ronaldo struck, with the final goal a Torino own goal.

Ronaldo’s effort was from a free-kick, and it was his very first for Juventus, having attempted 43 times since moving to the club from Real Madrid.

He has now scored 46 free-kick goals at club level, with 32 for Real Madrid and 13 for Manchester United.

The five-time Ballon d’Or winner also became the first player to score 25 Serie A goals in a season for Juventus since Omar Sivori in 1960-61.

The derby win over Torino was also notable for Gianluigi Buffon’s record-breaking 648th Serie A appearance.

Including his 17 Ligue 1 appearances for Paris St-Germain last season, the 42-year-old also has the record for most appearances in Europe’s top five leagues with 665.

Juventus, who are looking for a ninth consecutive league title, are now seven points above Lazio, who host AC Milan later on Saturday.