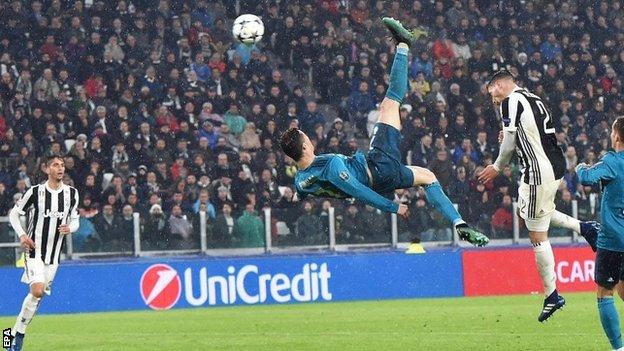 The stunning overhead kick that Cristiano Ronaldo scored for Real Madrid in a UEFA Champions League match against Juventus has been voted the Goal of the Season.

The goal was the third of the three goals scored by the Blancos in their 3-0 first leg win of the quarter final encounter at the Allianz Stadium.

Although Juve almost completed an incredible comeback at the Bernabeu, but Real prevailed and made it to the semifinal courtesy of a last-minute effort from the spot by Ronaldo.

The overhead kick, which was welcomed by a standing ovation from the home fans, claimed almost 200,000 of the 346,915 votes cast on the official website of UEFA.

A goal by Marseille star Dimitri Payet, whose effort in helped seal their 5-2 win over RB Leipzig in Europa League, was voted second.

Third place went to Eva Navarro’s goal for Spain in their Women’s U17 EURO final victory against Germany.

Ronaldo is just the third player to scoop the top prize, which was first handed out in 2015, as Barcelona superstar Lionel Messi took the award in its first two seasons, before Juventus striker Mario Mandzukic won it in 2017.