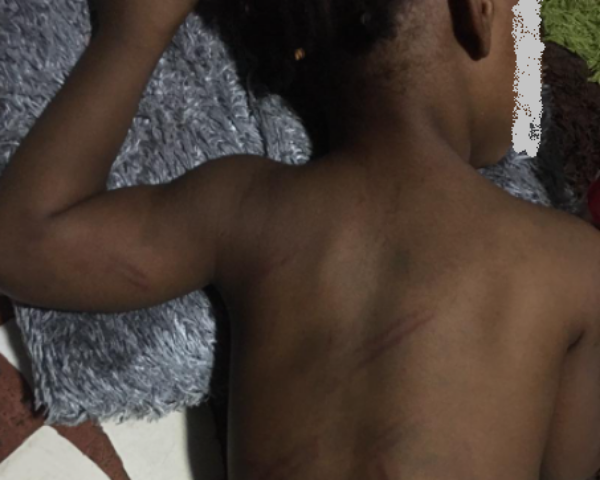 A two-year-old pupil of the Unic Vilos nursery/primary school, Lagos State has been left with marks on her skin after she was reportedly flogged 24 times by her class teacher for failing to recite the English alphabet.

Reporting the case on the microblogging site, Twitter, a netizen @WakaWakaTailor who said he is the uncle to the 2-year-old victim stated that the incident took place earlier in the week.

Speaking on his Twitter page, he mentioned that his niece was not the only person who was nefariously scolded by the teacher. He mentioned in his statement on the social media platform that the teacher also left a student bleeding from the nose.

“This is my 2 year old niece that was flogged mercilessly bcos she couldn’t recite the English alphabet.”

“When my sister,the mother confronted the teacher,she boasted that it wasn’t only the girl that was flogged but others were also flogged 24 strokes each (children of below 3 years o). And that she will flog them that this one is just testing.

“My sister also told me that one of her child came back the other day bleeding from the nose.when she asked her,the girl said she was flogged on the head,she confronted the school and they denied it.this one they can’t deny cos the marks of the flogging is there.”

He mentioned in the latter part of his thread that the school principal has accused his sister (the 2-year-old girl’s mother) of making attempts to tarnish the image of her school after the incident was reported to her.

“The owner of the school, according to my sister, accused her of wanting to bring down her school when she reported to her.”

Here is a photo of the 2-year-old girl’s back after she was reportedly flogged by the teacher.