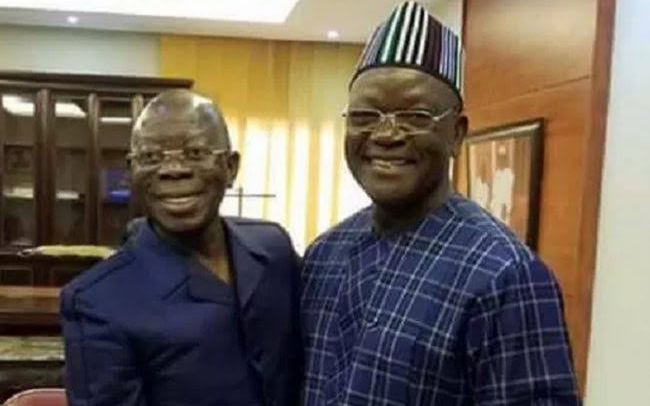 Nigerians on social media had much to say after Comrade Adams Oshiomole wrote a heart touching letter to Governor Samuel Ortom, recanting the libelous comments he made against the governor in 2018 at the wake of Ortom’s defection to the People’s Democratic Party (PDP) from the All Progressives Congress (APC).

The former Edo State governor and immediate-past chairman of the All Progressives Congress (APC) had during a press conference at the National APC Headquarters on July 28, 2018 accused Ortom of refusing to pay salaries, thereby deepening poverty in Benue State.

He also claimed that Ortom had failed to pay bailout funds and Paris Club funds.

In his retraction, Oshiomole noted that he made those allegations against the governor based on information he had since found to be false and baseless.

Recall that Governor Ortom, aggrieved by the former APC Chieftain’s allegations, filed a law suit against Oshiomole, demanding a retraction and N10 billion to be paid for “punitive, general, exemplary and aggravated damages”.

“That politics aside, Governor Samuel Ortom is a dear friend and brother with whom I have shared so much in common, including mutual respect.

“That as former colleagues and one time members of the Nigerian Governors’ forum and most importantly as someone whom I am just a phone call away from, any ridicule, embarrassment, spite and insult caused Dr Samuel Ortom is regretted.

“Owing to the relationship we share and in the larger interest of peace, harmony and brotherliness, I believe a complete retraction of my comments made on 27th July, 2018, and which Dr Samuel Ortom found offensive is proper and necessary.

“In view of all the above, I hereby retract the comments made during the press conference on 27th July, 2018, as it relates to Dr Samuel Ortom.”

He was never a politician. The game of politics is different from comrading LABOUR unions. BUBU used him for a purpose and he has exhausted that purpose. .

Since Oshiomhole got relegated in the political space, he has been going from one form of disgrace to another

The latest as seen here is him swallowing the words he carelessly vomited when he was in power. Life Na turn by turn pic.twitter.com/s9kHoUa1oy

He wouldn't if he was still enjoying the APC fraternity. Not a real man.

You know these people far too well.

Oshiomhole needs to tell us how Humble Pie tastes

Yoruba Activist, Sunday Igboho’s declaration of South-West Nigeria as “Yoruba Nation”, with claims that the region was no longer a part of Nigeria, got social media users reacting massively.

Igboho while addressing a press conference on Thursday, said there was no basis for “One Nigeria” as insecurity still loomed large in the South-West.

He further reiterated his stance against killer herdsmen vowing to deal with any found on Yourba land.

“Starting from now, we don’t want herdsmen in our land to disturb our farms again. If we meet any killer herdsmen, we are going to face and destroy them.

“If any police attack us for that, we are ready for them. We don’t want Nigeria again, but Yoruba nation. There is no essence for one Nigeria when major resources in the country are in the hands of the northerners.

“Enough is enough, no going back…we are not scared of anybody, these killer herders are taking over our land and they are killing us,” he said

Yoruba CASHtivist, Sunday Adeyemo a.k.a Sunday Igboho has declared the ‘Yoruba Nation’, claiming that South-Western states are no longer a part of Nigeria.

With the agitation for Yoruba nation, all sides must thread carefully to avoid escalation of violence

There is a due process for actions like this

Despite how Buhari gov't kept mute on insecurity. He closed borders that brings food to Yoruba land. Gumi & miyetti Allah are negotiating with terrorist. Fulani herdsmen are killing YORUBAs. If any Yoruba person is against sunday igboho that person must be enemy of Yoruba nation.

Now there's a clamor for Yoruba Nation, if you can't see the handwriting on the wall too bad. Oshiomole apologizing to Ortom, only points in one direction. Even the Tinubu camp are fed up of Buhari. Buhari should have never happened to Nigeria. The country is divided!

Yoruba people shouldn't allow Sunday Igboho to decide their fate, he's in no position to declare some part of Nigeria a 'Yoruba Nation' the best thing for Nigerians now is unity, not killing one another. Both the igbos and Yorubas should stop following Nnamdi Kanu and Igboho.

Sunday Igboho has declared Yoruba Nation but then would the Yoruba people really stand by him to actualize this?

107 years since the “Unholy Union” of the North & South. Nigeria expired in 2014. A Union must be renegotiated at expiration.

Just be sincere and ask yourself why are you demanding for a yoruba nation?

What makes you think in a yoruba nation, an ijebu man will not discriminate against an ibadan man.
Or you think an ekiti man would not be marginalised by an oyo man?

Reactions have also trailed the return of Nigeria’s First Lady, Aisha Buhari, to the country after her sudden disappearance from public eye since October 2020.

She was said to have returned to Nigeria on Wednesday night since leaving for Dubai after Hanan, one of her daughters, got married in September.

Although it is unclear why the First Lady left the country, speculations are that her absence was on medical grounds.

See how Nigerians welcomed her:

The Honorable Minister of Other Room Affairs, Hajia Aisha Buhari returns to Nigeria 😊

Aisha Buhari Returns To Nigeria After Six Months In Dubai

Your Excellency please hope you no go forget that Agege bread🥪🍞 you promised me 🙏🙏🙏 pic.twitter.com/uuCJgL1BNZ

Aisha Buhari just returned to Nigeria from Dubai after 6 months.

Aisha Buhari when the cabal pay her a visit: pic.twitter.com/3hAJ8Iz6kt

Aisha Buhari has returned from vacation Tour in Dubai…mama is just here to check up on Nigeria and go back to vacation in few days😁 pic.twitter.com/eKausHCGbc