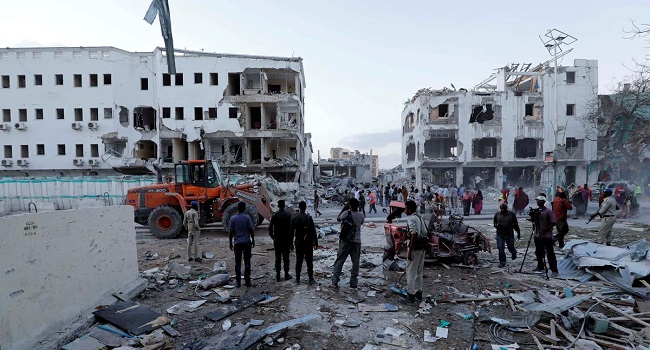 The development ends a day-long bomb and gun attack that killed at least 29 civilians.

According to Somali police, the militants were shot dead in a building they were trapped in central Mogadishu.

“The operation is over and the building is now controlled by the security forces. The three militants were shot dead, their bodies are inside the building,” police officer Captain Osman Mohamed told Reuters late on Friday afternoon.

Islamist al Shabaab fighters launched the assault with a suicide car bomb outside the Maka Al-Mukarama hotel on Thursday evening, destroying other structures, igniting a huge fire and leaving people wounded in the rubble.

The attack was immediately claimed by al-Shabab in a statement.

“Our special operation in Mogadishu successfully concluded after almost 24 hours. It targeted a hotel frequented by the members of the apostate government. Dozens of them eliminated, more injured,” Abdiasis Abu Musab, al Shabaab’s military operation spokesman, told Reuters on Friday.

Tension on the rise as India, Pakistan engage in heavy border gunfire