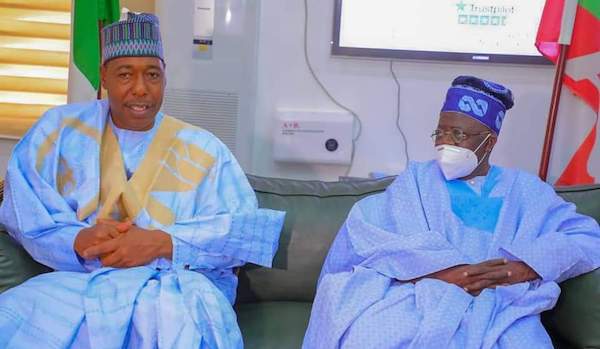 The National Leader of the All Progressives Congress (APC), Bola Tinubu, on Tuesday, charged the Nigerian military to change its strategy in the fight against the Boko Haram insurgents and other criminal elements terrorizing the citizens in several parts of the country.

Tinubu, according to a statement issued by his media office, made the call when he paid a sympathy visit to the Borno State governor, Prof. Babagana Zulum, over the recent killing of 43 rice farmers by Boko Haram fighters in the state.

“You can’t concentrate, become innovative, and excel if you have to make educational development in fear. We saw people who have endured so much agony, denial, brutality decided to run to their farms to develop means of livelihood not only for themselves but for all of us, at the end they were slaughtered. That’s not religion, it is not in our religion (Islam), it is not in Christianity either, it is an act of wickedness.”

In his response, Zulum thanked the ex-Lagos State governor for the “special visit.”

He reaffirmed his administration’s readiness to continue protecting the lives and property of people of Borno State.

The Boko Haram jihadists had on November 29 killed the farmers in Zabarmari village near the state capital.

The jihadists reportedly tied up the farmers and slit their throats.

In an audio message on Tuesday, the leader of the terror group, Abubakar Shekau, said the sect members were behind the students’ abduction.

He said: “I am Abubakar Shekau and our brothers are behind the kidnapping in Katsina.”

Why I dethroned Sanusi as Emir of Kano – Ganduje