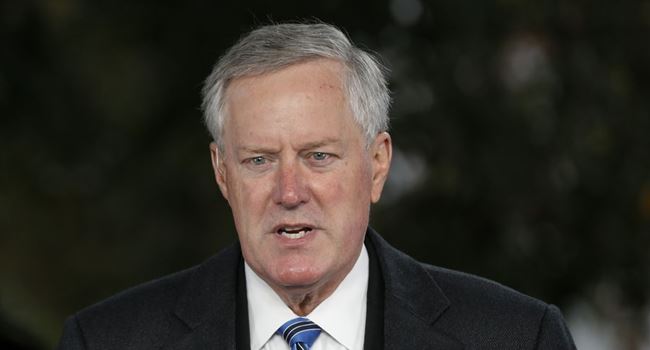 White House Chief of Staff Mark Meadows, who has frequently appeared at various public events without wearing a nose mask, has been diagnosed with the dreaded Covid-19 disease

This was confirmed on Friday by two senior administration officials who said Meadows tested positive for the virus but offered no details on when the chief of staff came down with the virus or his current condition.

The development comes less than two weeks after Marc Short, Vice President Mike Pence’s chief of staff and other aides tested positive for the deadly virus has killed more than 236,000 Americans so far this year.

Meanwhile, Joe Biden has declared that with the way things are going in the counting, he and his vice presidential running mate Kamala Harris are on track to win over 300 electoral votes.

“The numbers tell us a clear and convincing story: We’re going to win this race.”

He also appealed for unity in the country following a divisive campaign and voting, saying “we may be opponents, but we are not enemies.”

Related Topics:COVID-19Mark Meadows
Up Next

South Africa to deport 20 Africans involved in protests against xenophobia