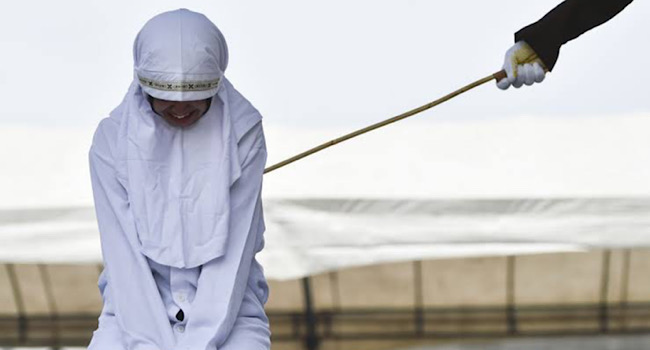 Two Christian men who were found guilty of drinking alcohol and gambling in Indonesia’s ultra-sensitive Aceh province, were given the humiliation of their lives after they were publicly flogged on Monday.

The punishment which has been roundly condemned by rights activists, is a rare instance of non-Muslims facing such in the largely Muslim dominated country.

The caning of the convicts came barely two weeks after two gay men were given 80 strokes of the cane under Islamic law after they were found guilty of engaging in homosexual sex.

The two accused Christians both received 40 lashes each from a masked Sharia officer who beat their bare backs with a stick.

One of them identified only as JF, said he chose flogging to avoid a criminal prosecution that could have seen him jailed up to six months.

“The Sharia police gave us options and we consciously decided to comply with the Islamic criminal code. No one forced me to choose it,” he said.

Aceh is the only province in the world’s most populous Muslim-majority country that still imposes Islamic laws.

Non-Muslims who have committed an offence that violates both national and religious laws can choose to be prosecuted under either system.

However, flogging of non-Muslims is rare with only a handful subjected to the punishment in recent years for crimes including adultery, gambling and selling alcohol.

Related Topics:alcoholFloggingGamblingindependenceIslamSharia law
Up Next