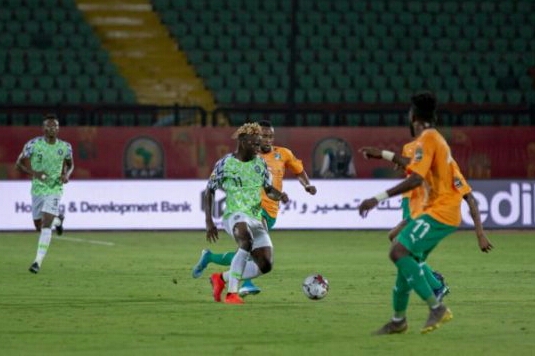 The Olympic Eagles of Nigeria were beaten 1-0 by Cote d’Ivoire in their opening game of the U-23 Africa Cup of Nations (AFCON) on Saturday.

The Imama Amapakabo team, who won the competition four years ago, began their title defence on a disappointing note at the Al Salam Stadium, Cairo in Egypt.

Cote d’Ivoire got the winner from a penalty kick, which was awarded after Nigerian centre-back Olisa Ndah was sent off following a poor tackle inside the box.

Nigeria had more chances in the second half but the Iviorians dominated the most part of the encounter.

Nigeria’s best chance came in the 65th minute when Orji Okonkwo came close to scoring from a corner, but his header hit the cross bar.

The Eagles will face Zambia in their next group B game on Tuesday at the Al Salam Stadium.