Home » Politics » WIKE TO DICKSON: I have no anti-ijaw agenda; I’ll continue to defend Rivers State 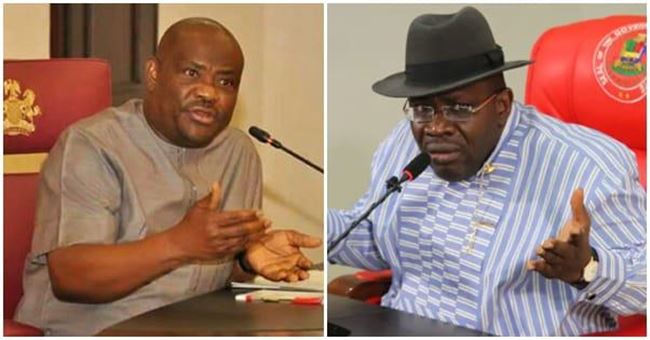 The Governor of Rivers State, Nyesome Wike has reacted to the recent comments made by Governor Seriake Dickson of Bayelsa State, who had accused him (Wike) of promoting “wicked clandestine ethnic supremacist agenda” in the politics of Rivers.

Wike who was addressing the Quarterly Meeting of the Rivers State Council of Traditional Rulers on Tuesday said that he has no anti-Ijaw agenda, while also emphasising that he was only committed to defending the assets of the state.

The state governor who used the opportunity to warn neighbouring states that he will fight to defend his state, also said that his actions are in the interest of Rivers people, adding that no one will be allowed to take what belongs to the state.

READ ALSO: Uncertainty lies ahead for Nigeria in 2020 —CUPP

“We are defending Rivers ownership of Soku Oil Wells. Soku Oil Wells are situated in Akuku-Toru Local Government Area of Rivers State. I am saying no, we will not allow a neighbouring state take over what belongs to our people.

“We don’t have any anti-Ijaw Agenda. If there is anyone with anti-Ijaw agenda, it is those coming from outside to claim Soku Oil Wells that belong to Rivers State. You want to take what belongs to our state and you want us to fold our hands.