10 Kannywood actresses to watch out for in 2021 | Ripples Nigeria 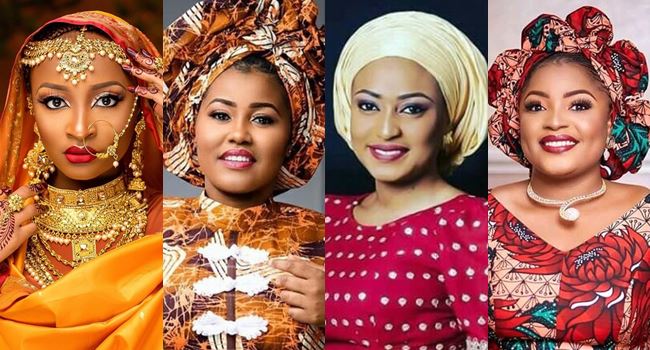 Kannywood is the Hausa-speaking segment of the Nigerian movie industry. It is synonymous with the India movie spectrum.

They have some of the most talented thespians in the entertainment industry.

The term, ‘Kannywood’ has origins in the late 1990s. At the time, Sunusi Shehu of Tauraruwa Magazine created the term Kannywood and it immediately resonated with the populace in the Northern part of Nigeria.

The term was coined in 1999, three years prior to the christening of ‘Nollywood’.

Check out the list of the top 10 Kannywood actresses that you need to know, who would make waves in that industry this year.

Rahama Sadau who was born on December 7, 1992, in Kaduna State, has a degree in Business Administration. She became famous in Kannywood after starring in a movie called ‘’Gani Ga Wane’’. She became prominent when she featured in the MTV series Shuga.

Hadiza Aliyu, popularly known as Hadiza Gabon is one of the prettiest Kannywood actresses in Nigeria. Hadiza was born on 1st June 1989 in Libreville, Republic of Gabon. She came to limelight after starring in the movie ‘’Ali yaga Ali’’.

Fatima Washa has appeared in numerous interesting Hausa movies including Rariya. The single beauty who possesses a soft voice was born on the 21st of February 1993. She is an avid reader.

Nafisa is one of the most talented and hardworking actresses in Kannywood. She was born on 23rd January 1991 in Jos, Plateau State. Her first movie Sai Wata Rana instantly made her popular in 2010. She gained modest popularity after starring in the movie ‘’Sai Wata Rana’’.

Read also: There are lines you don’t cross as an Hausa girl –Kannywood actress Rahama Sadau

The stunning actress has been featured in a lot of Kannywood movies.

She is definitely one Kannywood actress that you would be enthralled by her presence and charisma. She has beauty and brain which is her greatest weapon of success.

Hafsat, popularly known for her lead role in the movie ‘Barauniya,’ has a stunning look and an awesome personality.

The Kannywood actress was born in Shagamu but is an indigene of Kano state. Before her foray into acting, Hafsat was a full-time actress for nine years.

Ummi best known as Zee Zee by her fans has gained local notoriety in the northern part of Nigeria. She is one of the wealthiest actresses in the Kannywood industry. It was announced a while ago that she was in a relationship with superstar musician Timaya.

Hauwa died earlier this year and she was one of the most successful actresses in the industry prior to her demise. This is an honourable mention.

Mania died during the filming of the recently released movie, Namaste Wahala. Her contribution was honoured at the end of the movie.

This woman was not only the actress who appeared in many hit movies, but she was also a movie producer and one of the few female directors in Kannywood. Some of her works are billed to be released within the year.

The A-list Kannywood actress is undoubtedly one of the innovative women in the industry. she is renowned for her elegant personality, and is one of the few to look out for this year.