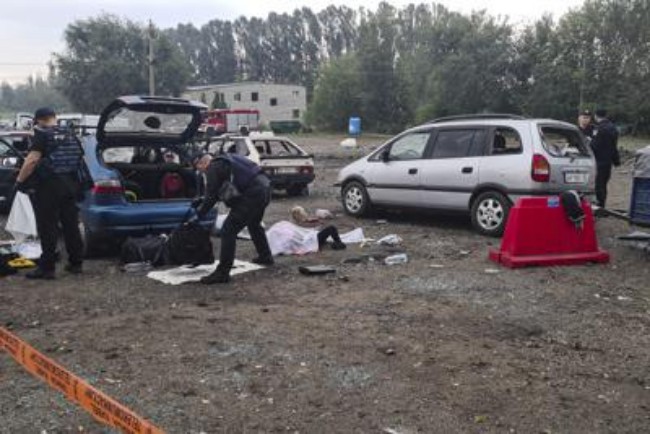 At least 25 civilians have been killed and several others wounded as Russian fighter jets pounded several Ukrainian cities with missiles, rockets and suicide drones as Moscow intensifies its aggressive moves to annex more Ukraine territories.

The attacks on Friday, according to Russian officials, was to fold more territories into Russia and under the protection of its nuclear umbrella.

According to the Deputy Head of Ukraine’s presidential office, Kyrylo Tymoshenko, in the city of Zaporizhzhia, anti-aircraft missiles that Russia has repurposed as ground-attack weapons rained down on people who were waiting in cars to cross into Russian-occupied territory, so they could bring family members back across the front lines.

Tymoshenko said 25 people were killed and 50 wounded in the raid.

“The airstrike left deep impact craters and sent shrapnel tearing through the humanitarian convoy’s lined-up vehicles, killing their passengers. Nearby buildings were demolished. Trash bags, blankets and, for one victim, a blood-soaked towel, were used to cover bodies,” he said.

Russian strikes were also reported in the city of Dnipro with the regional governor, Valentyn Reznichenko, saying at least one person was killed and five others wounded by Russian Iskander missiles that slammed into a transportation company, destroying buses, and that also damaged high-rise buildings.