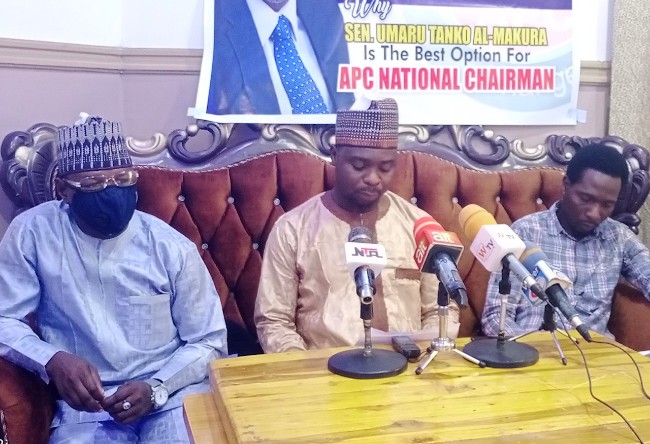 Members of the ruling All Progressives Congress (APC) in Bauchi state who are aggrieved by the outcome of the LGA Congress conducted last weekend have been called upon not to rush to the courts, but exhaust all internal processes of appeal for the good of the party.

The appeal was made by the National Chairman of APC Youth Progressive Forum, Ukkasha Hamza Rahama while briefing Journalists to review the outcome of the congresses.

He said that, “as we gather here to Congratulate the ruling party, the All Progressives Congress
(APC) for the successful conduct of local Governments Party congresses
nationwide, I want to express satisfaction with the process” .

He added that, “The party members waited anxiously to see this giant stride in the party’s success on its internal democracy as enshrined in the party’s constitution; this is indeed a road to success and strength upon strength ahead of 2023 general elections” .

“I therefore urge those that won, to carry everyone along because, the
success belongs to all and those who could not make it, should not portray
themselves as losers but as winners for the fact that, the party is successful
and also solicit you to pick up the torchlight of courage and move forward”, He added.

Ukkasha Rahama further said that, “We should tell ourselves that, there is no party without crisis especially a
Political Party that controls many States, Highest number of Serving
Senators and Members of the House of Representatives, this indeed is worth
celebrating” .

The APC Youth progressive forum national Chairman declared that, “The President and commander in chief of the armed forces of the Federal Republic of Nigeria, His Excellency, Muhammadu Buhari was brought to power under the APC’s platform, one cannot quantify the level of
experience, commitment, toughness and national sentiment this man has in
making sure Nigeria and the party are managed to this level”.

He opined that the congresses could be faced by petitions and appeals, “I would like to urge all not to take it beyond party level, our focus should be party success” .

He lamented that Many APC members are challenging the eligibility of the Caretaker Committee led by Yobe state
Governor, Mal Mala Buni saying however that, “I am happy with the Supreme court interpretations on the Party’s Standing rules” .
According to him, “The Supreme Court said that, the Party as an institution
did not breach any of its bye laws in appointing Mai Mala Buni to lead the
party and organize a befitting National Convention” .

“This means, there is no justification for any of our party members running
helter-skelter for constituting litigations against themselves. Please, Let us
together manage our internal problems ourselves, though conflicts are stages
of development”, he appealed.

“It is on this plight of ensuring that, APC outstanding legacies are sustained
after President Muhammadu Buhari’s term of office, We are using this medium
to call on the newly emerging delegates at the Local Government levels to
ensure that, they should place party’s interest above all other interest to
support the emergence of Senator Umaru Tanko Almakura as the next
national chairman of our great party”, he called.