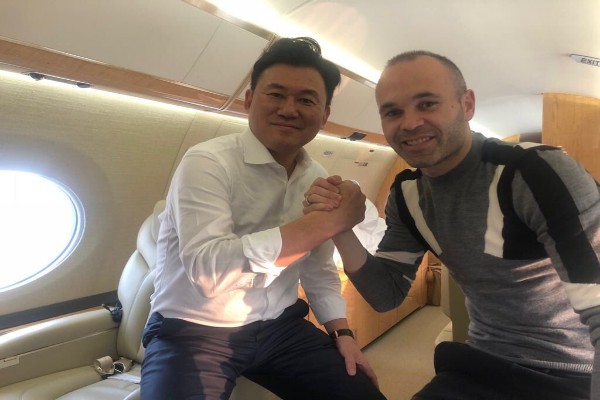 The 34-year old announced he was leaving Barcelona this summer after 22 years with the club, and Japan’s national broadcaster NHK had reported that the Asian side has come to an agreement with the player and his advisors.

According to reports, Iniesta moved for an undisclosed fee but the move is expected to be officially ratified on Thursday and he could be presented the same day, when his three-year contract will be announced.

Vissel, currently lying sixth in the first division, are owned by Japanese internet giants Rakuten, a company that is a shirt sponsor of Barcelona.

Hiroshi Mikitani, who owns Vissel Kobe and is the founder and chief executive of Rakuten, tweeted a picture of himself with Iniesta in an airplane on Wednesday, and Iniesta did likewise with the caption: “heading to my new home.”

Mikitani said in a press release: “By giving both fans and players the opportunity to see Iniesta’s world-class play style and technique, we believe his decision to come to Japan will have a major impact on not just Vissel Kobe, but on football in Japan as well as the whole of Asia. As the ‘New Vissel Kobe,’ we will work to achieve our goal of the becoming the No.1 club in Asia.

“His arrival in Japan will raise the profile of Japanese football globally, and we are already working on multiple activities to leverage his presence here and promote the J.League around the world.”

Iniesta will be playing at the FIFA 2018 World Cup following his inclusion in Spain’s 23-man squad released last week.

From ‘unknown’ footballer to W’Cup prospect, Idowu thanks Nigeria