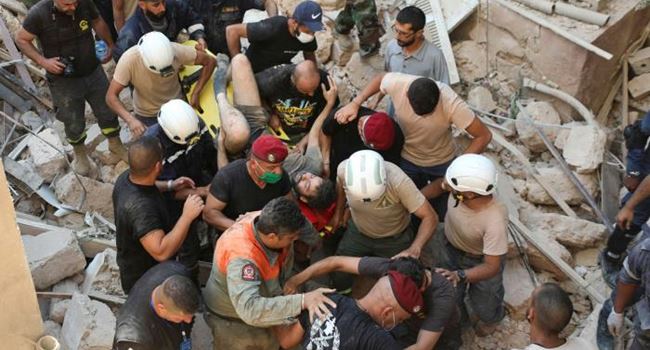 Concerned authorities in Lebanon have ordered the house arrest of several port officials over alleged negligence in storing explosive chemicals at the port; which caused the massive explosion that killed scores of victims in the country’s busy capital of Beirut.

Investigators in Lebanon are probing the deadly blast that ripped across Beirut due to the storage of tonnes of a highly explosive fertiliser in a waterfront warehouse causing a massive explosion on Tueday with damage estimated between $10-$15bn.

The explosion sent shockwaves through the Lebanese capital, killing at least 135 people and injuring 5,000 more.

Lebanese Prime Minister, Hassan Diab had earlier promised announcements about “the dangerous warehouse” that has been in existence since 2014.

He also appealed for international assistance to help the country, already struggling with its worst economic crisis and a surging COVID-19 outbreak.

The US Embassy in Beirut has also reported that at least one American citizen was confirmed killed and several more were injured in the explosion at Beirut’s port.

“We offer our sincerest condolences to their loved ones and are working to provide the affected US citizens and their families all possible consular assistance. We are working closely with local authorities to determine if any additional US citizens were affected,” the US statement said.