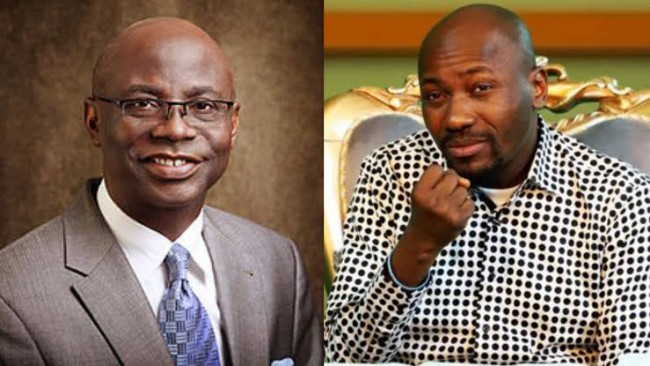 The group asked both men to stop meddling in issues involving it, Biafra, and the South-East in general, while accusing them of what it described as unprovoked verbal attack and ranting against it.

During a sermon two weeks ago, Apostle Suleman has claimed that “Igbo people are the problem of the Igbo ethnic nationality and are always destroying one another.:

The popular evangelist also said Igbo people did not support their own and would publicly disown one another.

While making reference to the agitation for Biafra by IPOB, he said if the Republic was created, it would still be an Igbo man that would destroy it as they do support one another.

Read also :Apostle Suleiman tackles people who vowed to never give money to the church

But reacting to Suleman’s statements in a statement on Wednesday, IPOB warned him against making provoking statements against the Igbos, saying it was quite puzzling that the Pastor would abandon his calling and resort to attacking other tribes without any cause.

In the statement issued by IPOB’s Media and Publicity Secretary, Emma Powerful, the group cautioned Suleman and others like him to restrain from making comments on it or the Igbo nation for their own good as such would not be tolerated.

“When have unguarded utterances against IPOB and the Igbo nation become part of Suleman’s calling?” the statement reads.

“We don’t intend to join issues with Suleman and his likes such as Tunde Bakare, but our message to them is very unambiguous: they should steer clear from any matter concerning the IPOB or the great Igbo race. Let them concentrate on their apostolic calling and restrain from unguarded utterances or vituperations on subjects beyond them.

“We warn Apostle Suleman and his likes to restrain from any comments on the IPOB or Igbo nation as that will not be tolerated anymore.

“We don’t want to have issues with any man of God, and men of God should know their limits.

“Men of God in the Bible days were never known for controversies,” it added.