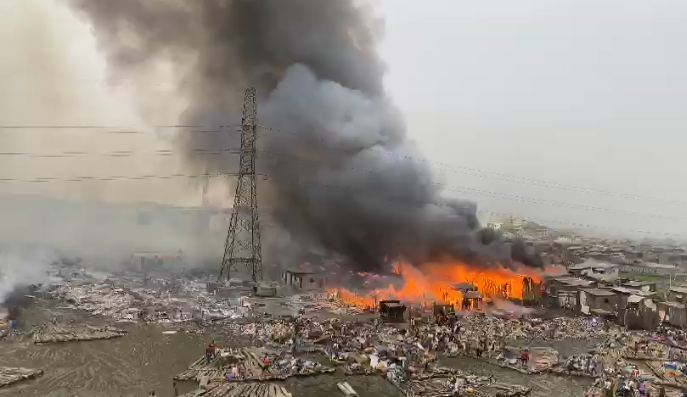 Fire on Wednesday razed 250 shanties and 40 sawmilling machines at Oko-Baba Sawmill in the Ebute-Meta area of Lagos.

Eyewitnesses told journalists the inferno which started at 12:40 a.m., raged and destroyed items worth several millions of Naira.

The fire also affected parts of Coates and Kano Streets near the Third Mainland Bridge.

The Acting Coordinator of the National Emergency Management Agency (NEMA), Ibrahim Farinloye, who confirmed the incident to journalists, said the prompt response from the State Fire Service and other emergency responders saved the situation from degenerating.

He said, “Presently, the fire has been put out and dampening of the scene ongoing by the responders.

“At least 40 sawmilling machines, 250 Shanties, and 200 makeshift houses were destroyed in the fire at Oko Baba Sawmill fire incident.”

The Director of Lagos State Fire and Rescue Service, Mrs. Margaret Adeseye, who also spoke on the incident, said: “On arrival at Ebute-Meta, Sari Iganmu and Ilupeju Fire Stations of the Lagos State Fire and Rescue Service discovered that make-shift commercial shops of various sizes and patterns used in trading and stocking of woods were on fire and the crews deployed copious water and chemical foam compound to douse the raging inferno.

“The fire spread due to the dryness of the combustible substances involved over a large expanse of land sweeping through Kano and Coates Streets. Other emergency responders were also called as the fire spread.”

She said the agency had received 19 emergency calls just five days into the new year.

Adeseye added: ” The year started on a rather frenzy note of fire as the 19th emergency calls were received in just five days into the new year.

Related Topics:fireLagos sawmill
Up Next