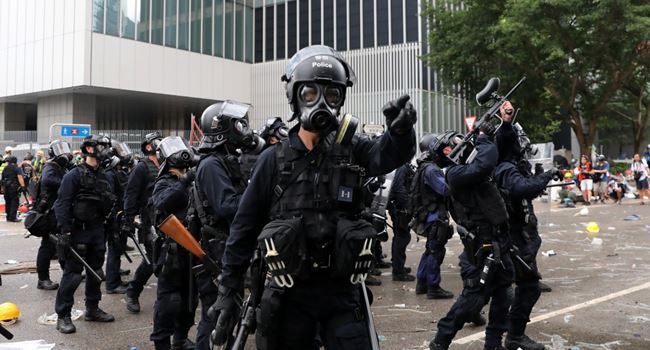 The Police in Hong Kong have ordered the arrest of no fewer than six pro-democracy activists living in exile on suspicion of violating a China-imposed national security law on the semi-autonomous city.

Chinese state media, CCTV, in a report late on Friday said that the six are wanted on suspicion of secession or colluding with foreign forces, crimes the new law punishes with up to life in prison.

It further revealed the name of the pro-democracy activists in the report as Nathan Law, Wayne Chan Ka-kui, Honcques Laus, Simon Cheng and Ray Wong Toi-yeung. Samuel Chu, an American citizen living in the United States, was also on the list.

Chu, speaking to Al Jazeera from the US city of Los Angeles, described warrant for his arrest as “outrageous” and said it showed “how desperate and how scared” China is of international pressure.

“It’s such an outlandish claim that they somehow have jurisdiction over an American citizen lobbying the American government,” said Chu, who runs the Washington, DC-based advocacy group, Hong Kong Democracy Council.

“The kind of global bullying and censorship, not only of citizens of other countries, but businesses … its starting to create a united front line, globally, pushing back,” Chu said, adding: “Today’s move, particularly, shows they are scared of losing control. They know that if Hong Kong can continue to be a place of resistance, it threatens their control all over the mainland.”

This came after one of Hong Kong’s most prominent democracy campaigners, Joshua Wong, vowed to fight on after he was banned alongside 11 other opposition figures from running in the upcoming legislative elections.

Wong who made the vow on Friday said the pro-democracy camp would continue their fight for freedom after officials disqualified some pro-democracy candidates from running in September’s legislative elections and local media reported the poll could be postponed.

The activist while addressing newsmen said that Hong Kong’s new national security was a weapon used against dissidents while also condemning the disqualification of pro-democracy candidates.