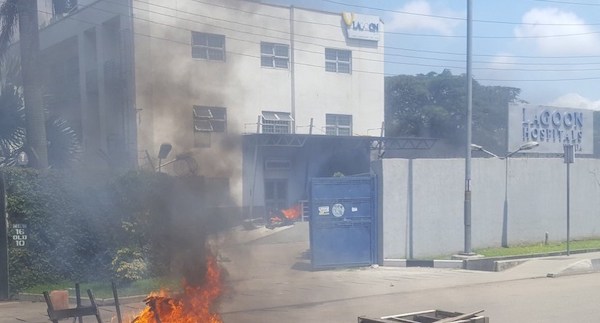 Suspected hoodlums on Tuesday afternoon attacked the Lagoon Hospitals in the Apapa area of Lagos State.

The hoodlums attacked the health facility after they sighted a man with fresh gunshot wounds in front of the hospital.

They accused the Lagoon hospital management of abandoning the victim who was dumped in front of the facility by an unknown person.

The hoodlums went on a rampage and vandalised the hospital facility.

The Chief Executive Officer of the hospital, Dr. Jimi Coker, who confirmed the incident in a statement, said the victim was brought in dead by a commercial motorcyclist.

He said: “It has come to our attention that misinformation is currently circulating on social media regarding the true events that led to the vandalisation of our Apapa Hospitals, putting the lives of staff and patients at risk.

“The victim was unfortunately brought in dead by an Okada man who decided to abandon the victim’s body outside the hospital premises.

“Lagoon Hospital in Apapa was not aware that the Okada driver had abandoned the victim on the road.

“It is on record that Lagoon Hospitals has always attended to all emergency cases, in line with our access to care policy for over 30 years.

“Unfortunately, we have had to shut down the hospital in Apapa due to this attack.”

Related Topics:hoodlumsLagos hospital
Up Next

US shuts consulate in Lagos over #EndSARS protests