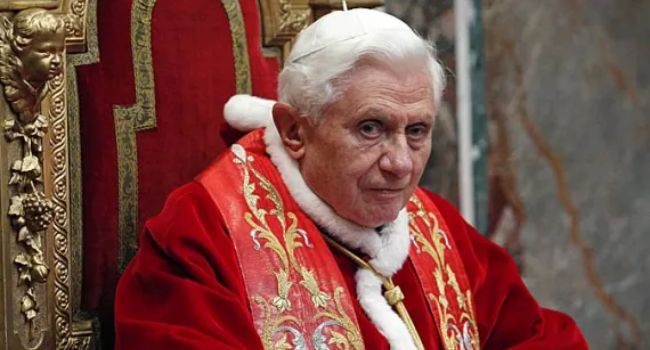 Former Pope Benedict XVI, the immediate past head of the Catholic Church has died at the age of 95 years.

This was made known in a short statement by Vatican spokesman, Matteo Bruni.

The statement reads, “With sorrow I inform you that the Pope Emeritus, Benedict XVI, passed away today at 9:34 in the Mater Ecclesiae Monastery in the Vatican.”

The late Pope made history in 2013 when he voluntarily resigned his position as head of the Catholic Church.

The deceased passed away in the Mater Ecclesiae Monastery in the Vatican.

Bruni added that the deceased will lie in state in St Peter’s Basilica in the Vatican.

Former Pope Benedict, who was the first pontiff in 600 years to resign, left behind a Catholic Church battered by sexual abuse scandals and polarised between conservatives and progressives.

Benedict, the first German pope in 1,000 years, had good relations with his successor, Pope Francis.

The head of the Catholic Church in England and Wales, Cardinal Vincent Nichols, described Pope Benedict as “one of the great theologians of the 20th century.”

“I remember with particular affection the remarkable Papal Visit to these lands in 2010. We saw his courtesy, his gentleness, the perceptiveness of his mind and the openness of his welcome to everybody that he met.”

Vatican authorities had confirmed that there was some aggravation in condition of the late Pope as a result of his advancing age.

Pope Francis, his successor, had also appealed to his final audience of the year at the Vatican to pray a special prayer for the Pope Emeritus Benedict” over his illness.