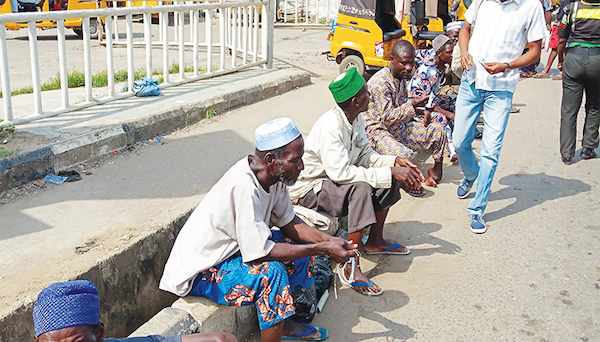 The Kano State Government has arrested 200 street beggars and Almajiri children for allegedly violating the law banning street begging in the state.

The Commissioner for Women Affairs and Social Development, Dr Zahra’u Muhammad-Umar, disclosed in Kano on Monday.

The word ‘Almajiri’ refers to the children of the non-formal Quranic schools commonly found in northern Nigeria.

Muhammad-Umar said following the ban on street begging in the state, the ministry arrested the beggars and almajiri children in the Kano metropolis with 60 per cent being women, children and men, while 30 per cent were almajiris.

“Some of those arrested sleep under the bridge, while some on the streets. Most of the beggars and almajiri children are from Kaduna, Bauchi, Borno and Yobe, among others while only a few are from Kano State.

“We noticed that because Kano is peaceful, that is why they came. It is very dangerous to leave them on the streets without knowing their parents, adding that bad behaviour is mostly found among the beggars. We will continue to arrest them to ensure sanity and rid the streets of all forms of crimes,” she said.

She explained that those arrested from other states would be transported to their states on Tuesday, and handed over to their parents.

She noted that the state would render some assistance to the almajiri children for them to be able to go back to school.

Meanwhile, Muhammad-Umar said the ministry also re-arrested a woman that was given N10,000 empowerment to be self-reliant but continued begging.

“I personally gave her N10,000 from my hard-earned money and she promised to stop street begging. I will make sure she is prosecuted,” she added.

While calling for closer collaboration with the government to curb street begging, she urged the people of the state, especially women, to take care of their children to be good citizens.

Muhammad-Umar also advocated for legislation on the prosecution of street beggars.

Recall that the Kano State Government on Feb. 5, arrested 500 beggars, transported them back to their various communities, and empowered about 60 of them with different entrepreneurial skills.

Related Topics:AlmajirisbeggarsKano State
Up Next