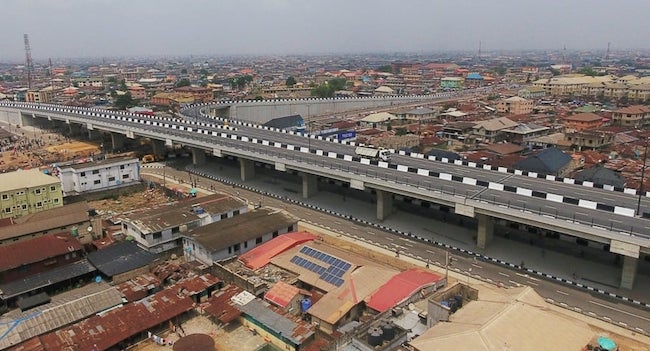 The Lagos State Governor, Babajide Sanwo-Olu, on Friday commissioned the dual carriageway flyover and five other roads at Pen Cinema in the Agege area of the state.

In his address at the event, Sanwo-Olu noted that the government was aware of the challenges faced by residents of the area.

According to him, residents and road users along the axis have clamoured for a solution to the suffocating nature of the gridlock occasioned by the huge human and vehicular traffic flowing through the intersection.

To address the challenge, the governor said his administration decided to continue with the construction of a precast and pre-stressed reinforced concrete dual-carriage flyover and ramp, with road work in the area.

He said: “We prioritise the continuation of strategic ongoing roads and link bridges as well as the development of new roads.

“We also listed many roads for urgent maintenance, and continue with the provision of ongoing strategic offices and public buildings.

“One of the most critical challenges being experienced on daily basis by residents/road users along the Agege Pen Cinema axis over the years was the heavy traffic volume occasioned by the geometric increase in traffic volume.”

He said the project was part of the state government’s efforts at achieving the Transportation and Traffic Management Pillar (T) in its strategic THEMES Agenda.

Governor Sanwo-Olu stressed that the government deliberately focused on the provision of infrastructure to achieve preconceived targets of reducing travel time and save important man-hours that would have been otherwise lost to traffic.

“In our quest to achieve the Transportation and Traffic Management Pillar (T) in our administration’s strategic THEMES Agenda, we deliberately focus on the provision of infrastructure to achieve preconceived targets of reducing travel time – save important man-hours that would have been otherwise lost to traffic, provide better riding surface leading to reduced maintenance cost, boost inter-connectivity and generally make life more meaningful to commuters in Lagos State.

“In line with the State Strategic Transport Master Plan (STMP), we deployed a two-pronged approach to infrastructure delivery, so as to bring immediate impactful succour and relief to commuters,” the governor added.

He commissioned the project in the company of a former governor of the state, Bola Tinubu, and top government officials in the state.

Related Topics:LagosPen Cinema Bridge
Up Next