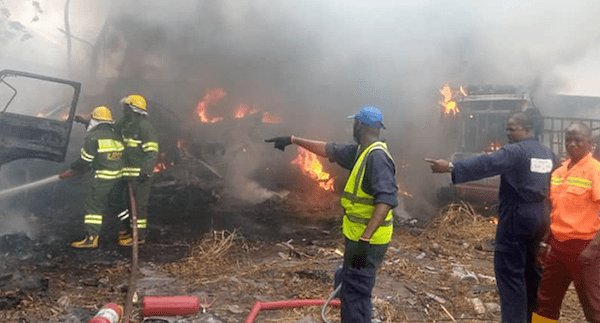 Following a fire outbreak on Friday that purportedly razed a section of the Lagos State Transport Management Agency (LASTMA) yard in the Oshodi area of the state, the agency has allayed fears of owners of mpounded vehicles.

LASTMA Assistant Director, Public Affairs, Olumide Filade, in a statement on Saturday, said “The General Manager of Lagos State Traffic Management Authority, Mr Olajide Oduyoye, has stated that the purported fire outbreak in LASTMA Yard started at the Abandoned Vehicle Yard and not on LASTMA Property as reported.

Oduyoye further said that “seven dead beat vehicles that had been abandoned and already in preparedness for disposal for years by crushing or other means got burnt”, adding, that the cause of fire is still unknown but that the Lagos State Fire Service responded promptly, put out the fire and mitigated further spread or damage to property.

Oduyoye averred that as confirmed by the Lagos State Emergency Management Agency, no injury or damage to any LASTMA property was recorded.

He assured the public especially those whose vehicles were apprehended for traffic offences in the Oshodi Yard not to entertain any fear.

However, LASTMA spokesman, Nosa Okunbor, who spoke earlier to journalists on Friday on the fire incident had said, at least 11 impounded vehicles were razed by the inferno.

Okunbor said: “LASEMA is in an ongoing operation at the LASTMA yard in Oshodi curtailing a fire outbreak which cause has not been ascertained.

“Information gathered by LRT on arrival at the scene revealed that the fire started from the compound where impounded vehicles were kept.

“The course of the fire was unknown as of this time. A total number of 10 cars and one trailer was razed by the inferno.

“No casualty was recorded at the scene as the LRT, LRU Fire and LASG Fire are all responders.”