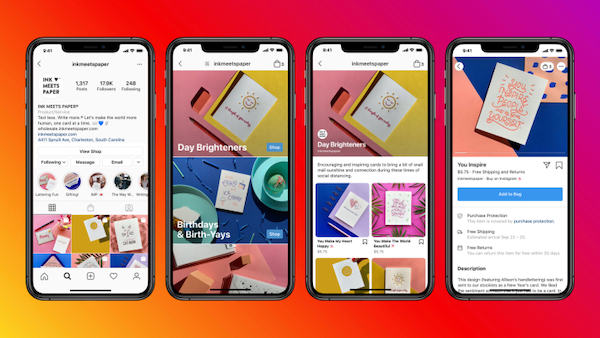 Mark Zuckerberg’s instant image sharing platform, Instagram, has today launched its Facebook Pay-powered Shop, a place to shop from inside Instagram Explore with Facebook Pay payment facility for purchases and donations in the U.S. This is bringing its 2019 ambition to live. Reviews, following the launch, revealed that the new feature of Instagram Shop provides a place to browse products from favorite brands and creators, as well as curated collections published by the Instagram-run “@shop” account.

Product analysts have commented that this is Facebook entering e-commerce with its new offering. While they acknowledged Facebook has the engineering facility to power the service, there are speculations and concerns over its acceptability from users. However, while there was an existing method to shop and make payment within Instagram app before this Shop launch, the new Instagram Shop is expected to encourage more browsing and discovery of brands, creators and products.

Speaking on its source of funding, the firm revealed that its company was backed a founding investment from the South African SME Fund. It added that being founded by six experienced investors and entrepreneurs, who have established a reputation for creating successful businesses both locally and internationally, gives future portfolio startups a grand start to scale upon investment. E4E, thus, will assist budding entrepreneurs on their journey by providing valuable insight into the world of entrepreneurship.

Which of the following social media platforms started off strictly for University students?

While opening businesses in China by Americans and Allies, is much unexpected at this time, considering recent actions and reactions from both countries against each another; Apple has perhaps stirred the still water, unveiling, on Friday, a new megastore in China. As reported, located in Beijing’s upscale shopping district Sanlitun, the outlet adds to the existing size of Apple’s store in China.

On the existing business tension between America and China, the U.S.’ Attorney General William Barr, had earlier, on Thursday, attacked a raft of American tech companies, including Apple, for playing by China’s rules, singling out Apple for being “acquiescence to the Chinese Communists.” Industry leaders and analysts have noted that Apple had long relied on China not just for manufacturing partners but also generating revenues from App Store (especially games) and iPhone sales. Hence, the company’s continued venture interaction suggests that Apple’s concerns are business oriented, with or without diplomacy.

The University of Cape Town’s GSB Solution Space has launched its 2020 E-Track Programme for entrepreneurs. The initiative comes as a partnership venture with MTN Group, inviting entrepreneurs to join the cohort. According to the organisers, the three-part venture acceleration programme is aimed at supporting individuals or teams to build scalable businesses. In doing this, the programme is expected to promote entrepreneurship, as well as, act as a platform for corporate partners to engage and collaborate.

Speaking on the essence of the programme, the hosting bodies noted that successful entrepreneurs will be given an opportunity to learn how to launch and scale a business, build a team, create a prototype and verify how a unique product or service could be developed further. More so, it is intended through the programme, that attendees will be able to gain access to a vibrant ecosystem of entrepreneurs, investors, mentorship and advisory services provided through corporate partners.

Kenyan tech-enabled, sustainable forestry company Komaza has made public its recent raiser of US$28 million in Series B funding to help it grow its impact. According to Komaza, which is revolutionising the wood industry in Africa through its innovative smallholder platform, its company uses artificial intelligence (AI) and satellite data to map existing tree growth and real-time mobile apps on the ground to track farmer’s progress.

Since inception, the startup has reportedly planted six million trees with 25,000 smallholder farmers. Commenting on the value brought to the table by the company, analysts have noted that the company’s “microforestry” model represented a paradigm shift in the industry from large, costly plantations to distributed partnerships with local farmers. According to Komaza, its Series A led Novastar Ventures returned as investor, to co-lead the round alongside Novastar LPs AXA Investment Managers and the Dutch development bank FMO.

The founders initially limited Facebook membership to Harvard students. Membership was expanded to Columbia, Stanford, and Yale before being expanded to the rest of the Ivy League, MIT, and higher education institutions in the Boston area, then various other universities, and lastly high school students. Since 2006, anyone who claims to be at least 13 years old has been allowed to become a registered user of Facebook, though this may vary depending on local laws. The name comes from the face book directories often given to American university students.