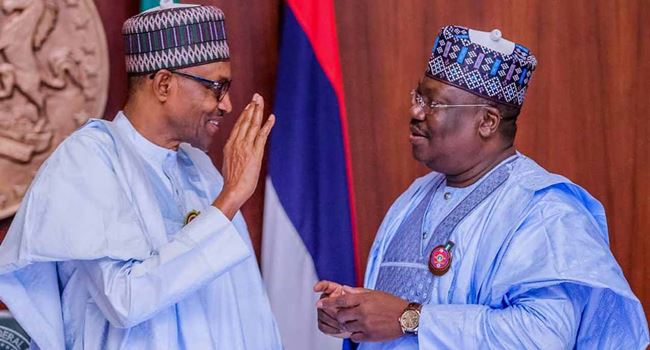 The President of the Senate, Ahmad Lawan, last week spoilt the fun for critics who continue to see everything wrong with the seeming open romance between the National Assembly (NASS) and the Executive, led by President Muhammadu Buhari.

His stance is a top pick among other juicy stories that kept NASS in the front burner of public debate.

On January 19, Senator Lawan said lawmakers had no reason to fight President Buhari in order to please anybody in the country.

He made this known when a delegation from Adamawa State paid him a visit, in Abuja, in appreciation of NASS’ intervention in converting the Modibbo Adama University, Yola, into a conventional university.

Lawan’s disposition heightens the debate around the interdependence of the three arms of government. The widely held perception is that NASS, since 2019, has been a tool in President Buhari’s hands on account of its failing resolve to fully assert its authority.

The development also deepens concerns that the lawmakers, and in this case the Senate, have chosen deliberately to get browbeaten in the name of avoiding unnecessary fights.

Only last year, Senators, during plenary, decried Buhari’s negligence in implementing their resolutions. A similar treatment was extended to the House of Representatives in December 2020 when, without any official explanation, President Buhari shunned its invite.

Interestingly, the lawmakers, thoroughly humbled, tugged their tails in between their legs and pretended all was well.

While Lawan reserves the right to keep the Buhari romance going, it must be noted that the danger of installing a weakened legislature is the rise of a dictatorship which could ultimately destroy the gains of the country’s democratic journey.

“The fundamental issue is the lack of coordination. Who is responsible for coordinating the various levels? Nobody has been able to answer that. Is it the NSA, is it the Chief of Defence Staff, is it Mr. President himself? Of all the revelations made to us by the NSA in the Eighth Assembly, one thing that was clear was that there was no synergy among the security agencies. Some of us are calling for funding, if we are unable to ensure a coordination unit, then it would amount to nothing.”

The Vice Chairman of the Senate Committee on Customs and Excise, Senator Francis Fadahunsi, on January 22, alleged that some retired military, police and paramilitary officers were behind the ongoing smuggling activities at Nigeria’s land borders.

“There is an event in Ogun State when a Custom Officer was shot and was taken away by the smugglers. Who are these smugglers, particularly in the IIaro and Idiroko axis of Ogun State? They are all retired Police, retired Customs, retired military personnel of other security operatives. Those are the people carrying contraband goods.”

Read also: NASS REPUBLIC: As Reps mull keeping students at home. Two other stories, and a quote to remember

Fadahunsi’s accusations, no doubt, are quite weighty but coming from a retired Deputy Comptroller General of the NCS, his allegations cannot be deemed frivolous.

The expectation, therefore, is that the NASS leadership will raise appropriate committees of the assembly to commence a formal probe of these allegations.

Of course, the other pertinent issue to deal with will be to determine why, in spite of the president’s directives, Nigeria’s borders have remained very porous and a huge drain on the economy.

On January 19, the Chairman, House Technical Committee on Customs and Excise, Leke Abejide, disclosed that there was a lack of scanners at various ports, across the country, compromising the nation’s security.

He made the disclosure when he led other members of the Committee on the oversight of Customs formations in Zone C of the Nigeria Customs Service (NCS), with headquarters in Port Harcourt.

Noting that the ugly development has exposed the country to possible importation of illegal arms and ammunition, the lawmaker also lamented the abandonment of scanners purchased for the customs over the years, especially after they were allegedly taken from the companies that installed them and given to another company which lacked the technical capacity to handle the equipment.

Inside Abejide’s disclosure lies one of the fault lines that amplifies insecurity in Nigeria. Though his assurances of a comprehensive investigation into the matter by the House sounds persuasive, it is hoped that Abejide’s Committee will match words with action.

Will Abejide’s Committee seek to overcome the long held perception that oversight visits to government agencies are only but for the optics? Or, will his promises evaporate like the many others vouched for by some committee chairmen?

Until actions begin to manifest, answers to posers raised will remain in the realm of conjectures.

Urhoghide made the statement on January 29, 2020, when the Senate debated the rising insecurity in the country. He represents Edo South Senatorial District. He was first elected into the Red Chambers of the National Assembly in 2015.