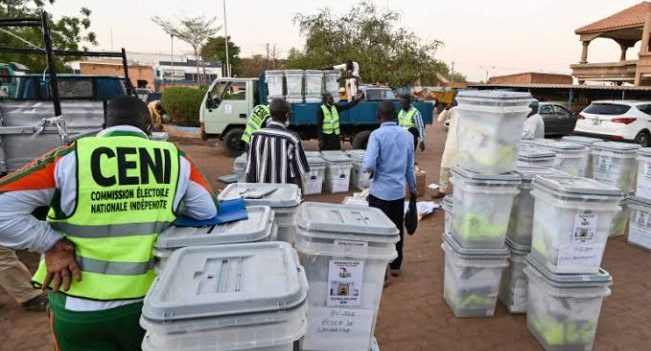 Niger Republic is set to hold its elections today, December 27, in the country’s first democratic transition of power between two democratically elected presidents.

Former Minister of the Interior Mohamed Bazoum, the ruling party’s candidate, is the overwhelming favourite to succeed President Mahamadou Issoufou, who is stepping down after two five-year terms.

Bazoum, 60, has promised continuity with Issoufou’s policies, while also vowing to clean up pervasive corruption in the West African country.

He will have 29 other candidates to contend with as they will hope to force a second round of voting by denying him an outright majority of the vote.

Hama Amadou, who finished runner-up in the last election, was barred from running because of a criminal conviction, leaving the opposition without an obvious figurehead until last week, when his party called on its supporters to turn out for Mahamane Ousmane, who was president from 1993 to 1996.

Approximately 7.4 million people are registered to vote for the new president, a race that coincides with legislative elections.

Campaigning has been overshadowed by the issue of security in a country that has suffered repeated attacks near its borders with Nigeria, Mali, and Burkina Faso from fighters linked to al-Qaeda, Boko Haram and ISIL (ISIS).

Among the prominent candidates is Seini Oumarou, a high representative of the Head of State since 2016, a post he recently left. Seini Oumarou was nominated by his party, the National Movement for Social Development (MNSD).

Former Minister of State for Planning and Development, Amadou Boubacar Cissé is the candidate of the Union for Democracy and Republic (Udr Tabbat).

He was elected President of the Republic of Niger in the first democratic election on March 27, 1993.

After several months of social tensions, he was overthrown in a coup d’état led by Colonel Ibrahim Baré Mainassara in January 1996. He is the candidate of the Renewed Democratic and Republican Party (Renouveau Démocratique et Républicain).

Ibrahim Yacouba, who ran against current President Mahamadou Issoufou in the 2016 presidential election, came 5th with 4.43% of the vote in the first round. He was Minister of Foreign Affairs, but was dismissed in April 2018 by the Issoufou for “showing disloyalty.” Yacouba is the candidate of the Patriotic Movement of Niger (MPN).

Although the court didn’t give a specific reason, it is assumed Amadou’s candidacy was rejected because of a one-year jail sentence.

The former Prime Minister and former President of the National Assembly was sentenced in 2017 to one year in prison in a case of infant trafficking.

Although he had been granted a presidential pardon last March while serving his sentence, he was still, according to the Constitutional Court, affected by Article 8 of the Electoral Code which stipulates that anyone sentenced to at least one year in prison cannot be allowed to run for president.