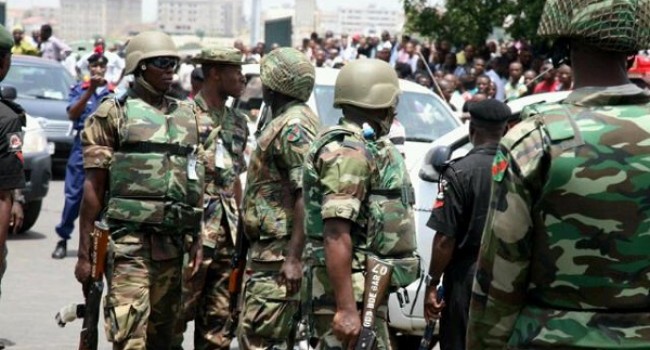 The Nigerian army has disowned a viral video making the rounds that it ordered its men to kill all the residents in Orlu local government area of Imo State, during a recent military operation to flush out operatives of the Eastern Security Network (ESN) from the forest.

The video which was recorded by one Joseph who claimed to be a soldier based in Bayelsa State, had accused the army authority of giving orders to its men to kill Orlu residents.

But reacting to the accusation in a statement on Wednesday, the Deputy Director, Army Public Relations, 82 Division, Col. Aliyu Yusuf, said the video was a malicious attempt to “cause resentment and smear campaign” against the military.

Yusuf described the allegation as untrue, adding that the public should be cautious of such fake news which seeks to “incite violence and tarnish the image” of the Nigerian army.

“The attention of Headquarters 82 Division Nigerian Army has been drawn to an orchestrated video clip by an unpatriotic element which is being circulated on the social media, claiming to be a soldier in the Nigerian Army by name Joseph from Bayelsa State.

“The video was recorded in an unknown market claiming to be privy to a supposed order given by 302 Artillery Regiment, Onitsha, to start killing everybody at Orlu Market and environs in Orlu L.G.A in Imo State.

“Preliminary investigation revealed that it was a calculated attempt to maliciously fabricate sensational stories to cause resentment and smear campaign against Nigerian Army Internal Security Operations.

“The supposed individual in the video was not bold enough to reveal his true identity as claimed or present his so called military uniform and identity card which were deliberately obscured to deceive innocent target audience.

“The Nigerian Army recognizes the right of citizens to hold and share opinions on social media and not to spread divisive contents by unpatriotic individuals.

“This mischievous misrepresentation of facts, misinformation and fabrication of outright falsehood as deliberately captured in the video clip, are being orchestrated in the social media to tarnish the good image and reputation of the military. This great disservice is not acceptable by any standard.

“The Headquarters 82 Division Nigerian Army therefore wishes to reassure law abiding citizens that the Nigerian Army remains a professional force, that respects fundamental human rights and deploy its personnel whenever or wherever duty calls.

“It is worth to note that Nigerian Army troops deployed for Internal Security Operations are guided by extant rules and regulations as stipulated in Nigerian Army Code of Conducts and Rules of Engagement in line with global best practices.

“The general public is therefore urged to disregard the false information contained in the video.”

ANAMBRA GUBER POLL: My mission is to empower one million youths yearly –Soludo