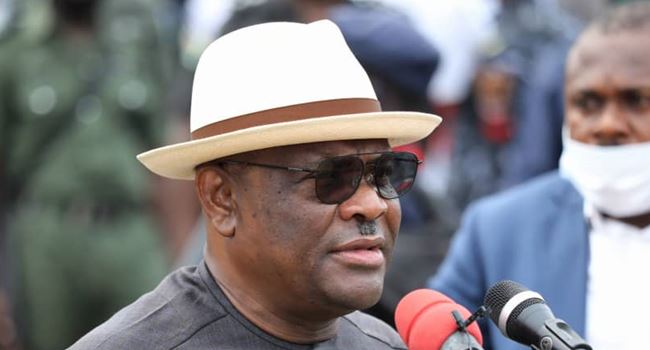 Rivers State Governor Nyesom Wike has said that Nigerians now wait earnestly to have the Peoples Democratic Party (PDP) take over power at the federal level in order to enshrine good governance.

The governor called on the current ruling party, the All Progressives Congress (APC) to be courageous enough to accept defeat in 2023.

A statement by Kelvin Ebiri, his media aide on Wednesday, said Wike spoke during the inauguration of the 11.53 kilometers Agbonchai-Oyigbo road, connecting Eleme and Oyigbo Local Government Areas and performed by the former Senate Majority leader, Senator Mohammed Ali Ndume.

The governor said Nigerians have increased their yearnings for good governance, improved economy and developmental projects that PDP has continued to provide in the states that it controls.

“Eleme people, I want to sincerely thank you for the support that you’ve given to me and the PDP. Do not relent. Continue because the hope of this country depends on PDP,” said.

He declared that the PDP is working in Rivers State and in other states that are controlled by the opposition party.

He urged Senator Ndume and the APC to respect the wishes of Nigerians who are determined to return the PDP to power in 2023 to provide them dividends of democracy.

“To our special Guest of Honour (Ndume), he should not be angry because we are taking over from them. When they came, we didn’t fight, they took over. Now that Nigerians have decided to change them, let them also handover to us as quickly as possible without any fight.”

Ndume, speaking at the event, said he felt truly humbled to perform the task and be part of what Wike was doing in his state.

“Governor Wike is my very good friend, a trusted leader, a very honest person. One thing we have in common is that, as a leader, you must stand out and speak the truth even if you’re alone and Wike is known for that.

“There is new hope for the state and he is Wike. Now, Rivers is not only becoming a Garden City again but it is becoming a Golden City. May God continue to give you (Wike) the strength,” Ndume said.