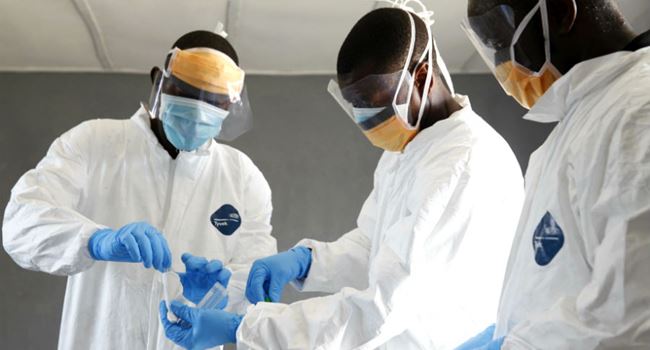 UNIMED had announced the sacking of the doctors in a letter that also said that it had suspended its residency training programme from August 1st, 2020.

In the letter, all resident doctors, directly employed by the hospital, were asked to seek continuation of their programme in other institutions where a training programme was ongoing.

The letter, dated June 23, and signed by Director of Administration of UNIMED, Adeeyo Babatunde said it was to enable the hospital to focus on service delivery in order to combat COVID-19 outbreak without distraction of agitation from the doctors.

The letter, meanwhile, said that some of the resident doctors might be considered for re-adimission, when the programme recommences.

However, in a statement this weekend through the state commissioner for Information and Orientation, Donald Ojogo, the Ondo State government denied the sacking of the doctors.

Ojogo said “Whatever issues that led to the strike action by the Doctors under the Residency Programme and the reprimand by the Management of UNIMED Teaching Hospital are currently being looked into. Such shall be resolved by Monday, hopefully.

“We wish to, therefore, emphasize that at no time did the State Government sack Doctors as the public is being made to erroneously believe.

”It should be noted that the UNIMED Residency arrangement is the first since the establishment of the Nation’s premier medical University. It is mostly undertaken by the Federal Government as many States do not find financial space for such.

“Nonetheless, it is pertinent to clarify that there is a wide difference between Doctors employed by the State Government and those under a Residency Programme.

“The Residency is a Post Graduate Programme usually sponsored by Governments even as such beneficiaries render services for a specific period. In effect, Doctors under the Residency Programme are more or less, temporary Staff members who qualify as Consultants after their period of training.”

Resident doctors of the institution had last week embarked on strike action.

Among other things, they demanded for the provision of Personal Protective Equipment (PPE) and other security measures to save their members from COVID-19.

They also demanded for the payment of their outstanding arrears from September 2019 to May 2020, payment of 50 per cent COVID-19 allowance and others.

But in his response to the development during the commissioning of the first dialysis centre in Akure, the Chief Medical Director of UNIMED, Dr. Oluwole Ige, said the sacked doctors were more concerned in unionism than commitment to work.

He said, “The Resident doctors earn the best pay package among the four groups of doctors in the hospital with an additional benefit of training and advancing to be consultants. That has been the most disruptive group to the growth of the hospital.

“They have exaggerated and deliberately distorted the issues of their wage to the extent of putting the hospital management and government into disrepute.

“The training programme might be suspended until such a time that it will be conducive to train without rancour,” he said.

The spokesman of the Ondo ARD, Taiwo Olagbe, in his reaction said the development remained a mere joke.

According to him, the government could crumble the health sector in the state with the supposed sack action.