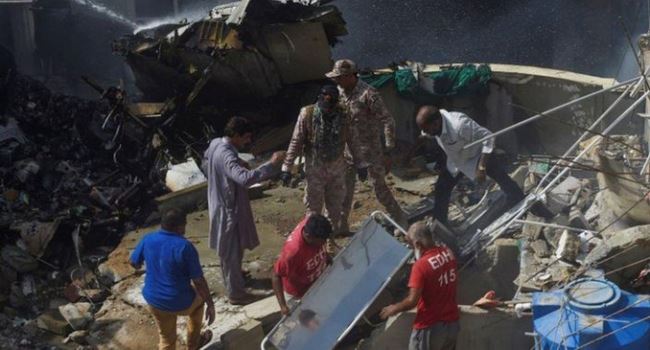 A Pakistan plane Airbus A320 carrying nearly 100 people en route from Lahore has crashed in a residential area near the airport in the ever busy and populated city of Karachi, killing at least 30 people and wounding many others.

The country’s civil aviation agency said in a statement on Friday that the Pakistan International Airlines (PIA) plane was close to landing at Karachi’s Jinnah International Airport when it came down among houses.

The incident happened when the plane lost contact with air traffic control just after 2:30pm (09:30 GMT), according to PIA spokesman Abdullah Hafeez who said there were 91 passengers and seven crew members on board the flight.

It was unclear if the dead were all passengers or also included people on the ground.

The Pakistan military said security forces had been deployed to the area and helicopters were being used to survey the damage and help ongoing rescue operations.

“Our plane A320 which was coming from Lahore to Karachi …the last words for the pilot were that there is a technical problem and he was told on final approach that he has both runways available to him. But the pilot indicated that he wanted to go around,” PIA CEO Arshad Malik said in a video message released after the crash.

Related Topics:Pakistanplane crash
Up Next

I never prosecuted Akpabio, because he was never charged to court by EFCC —Keyamo