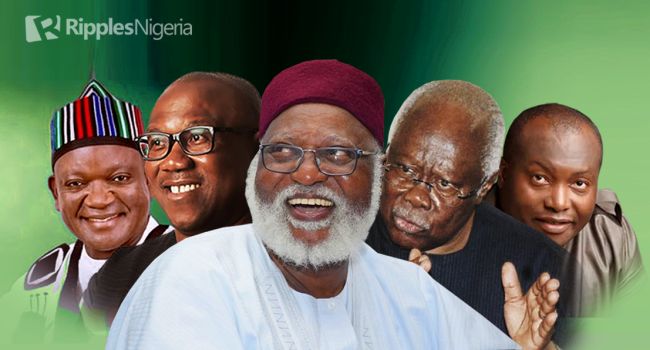 On September 15, ANAP in a report revealed that the former Anambra State governor, Peter Obi, would emerge as the country’s next president if the election takes place today.

Peterside, who featured in an Arise TV programme, said Obi garnered 31 percent in the poll to edge the duo of the All Progressives Congress (APC) presidential candidate, Asiwaju Bola Ahmed Tinubu and his Peoples Democratic Party (PDP) rival, Atiku Abubakar, who polled 13 percent to second place.

The New Nigeria Peoples Party (NNPP) candidate, Rabiu Kwankwaso, who scored 3 percent in the exercise, was described as a dark horse in the race.

Peterside, however, declared that no candidate is in clear lead in all the regions.
He said: “In every nation and election season, there are always polls and there might be surprises and the interesting thing about this poll is that Peter Obi is in the lead and favourite to win the 2023 elections.

“There is always an outsider in every election and Rabiu Kwankwaso fits the profile with quite a substantial number of percentile. This poll is unique because the election is gearing up to be a very closely-contested three-horse race and no candidate is in the clear lead in all the regions.

“Furthermore, Obi’s votes cut across all demographics and not just the youth and the issues for most of the respondents are security and economy.”

The poll might be a true reflection of the new aura around Obi and Nigerians’ increasing crave for a new order after years of the locust.

However, it is a no brainer that success in an election goes beyond public opinion and acceptability on social media. It is an outcome of general acceptability across the social strata and a solid foundation that comes from years of hardwork and networking built from relationships and trust.

While exit polls are not an uncommon feature in the run up to elections, the credibility of such exercises would vary on the strength of the scientific approaches adopted. It would not surprise if more of such polls are announced to counter earlier narratives, especially in our clime where cash-and-carry politics is the norm.

However, Obi’s emergence has introduced a new dimension to the country’s election process and this can only bode well for our democracy.

The Benue State Governor, Samuel Ortom, on September 14 blasted the All Progressives Congress (APC) for failing to keep to its promises.

In a statement issued by his Chief Press Secretary, Nathaniel Ikyur, the governor added that the ruling party had taken Nigeria from top to bottom in the last seven years.

He stressed that the abysmal performance of the APC-led government would lead to the failure of the party in the 2023 general elections.

Ortom said: “As a people, Nigerians need to have a viable alternative to the current crop of leaders among the ruling party.
“APC has kept their promise to take Nigeria from top to bottom. They have taken our country to the bottom. It’s a big shame. For us in the Peoples Democratic Party (PDP), the onus rests on us to mend the cracks in our party. No external influence will do that for us. By the grace of God, we will reach a successful end so that we can move on.”

What Ortom said about the APC-led government’s poor performance in the last seven years is not new and Nigerians have resigned to their fate at least until May 29, 2023, when a new government is ushered.

However, the governor’s constant rhetorics against the party and its government has become an embarrassment even to himself with some of his die-hard supporters now questioning his own performance in Benue State and which in reality hardly calls for celebration.

Ortom’s recent statement also puts into question the authenticity of a report on the agreement between the APC presidential candidate, Bola Ahmed Tinubu and a group led by the Rivers State Governor, Nyesom Wike, of which the Benue governor was a key member, on the 2023 presidential election.

The PDP chieftain made the call at a press conference in Lagos. He said: “Let me reiterate again that the will of the people must be respected and the six top offices in the country must be distributed equitably and fairly because PDP is not a private company.

Read also: QuickRead: ASUU’s extension of strike. Four other stories we tracked and why they matter

“The office of the National Chairman must come to the South before we commence the presidential campaign if victory is to be secured in the next general election.”

The current disagreement over the chairmanship position means the PDP might go into the 2023 election period as a divided house and this does not bode well for a party that is bent on regaining power at the centre next year.

Unless all the aggrieved persons put aside their differences and work together as a cohesive unit, the party chances of wresting power from APC in 2023 may be as good as over.

Five persons including some security agents were killed in the attack. Ubah, who confirmed the attack to journalists the following day, said: “It is unfortunate I lost persons who were very close to my heart including Obum Ikechukwu and Goodness Mathias in the unfortunate attack.”

The attack on the lawmaker again illustrates the prevailing insecurity in the country.

It also shows that nobody or nowhere is safe in Nigeria anymore with criminals having a field day wreaking havoc in every part of the country.

It is a direct challenge for the government to gird its loins and come up with a workable solution to the problem instead of throwing up its hands in the air and allowing criminals a free reign in the country.

The National Peace Committee (NPC) led by former head of state, Abdulsalam Abubakar, on September 16 mandated political parties and their presidential candidates to sign peace accords ahead of the commencement of the presidential campaign.

The 2023 election campaign will begin on September 28.

In a letter signed by Abubakar, the committee said the peace accord would be signed twice ahead of the 2023 general elections.

The letter read: “The first signing is scheduled to happen at the start of the campaigns this September and the second in January of 2023, just before the elections.”

The peace initiative may go a long way in moderating the conduct of candidates in the 2023 elections.

The arrangement might as well ensure that campaigns are conducted in a peaceful manner and prevent the escalation of tension and insecurity pervading the country.

However, given previous trends, Nigerians may do well not to build high hopes on the photo ops which usually attend these events. In the absence of strong values built on transparency, chances are that our elections will remain defined by violent acts.

QuickRead: ASUU’s extension of strike. Four other stories we tracked and why they matter