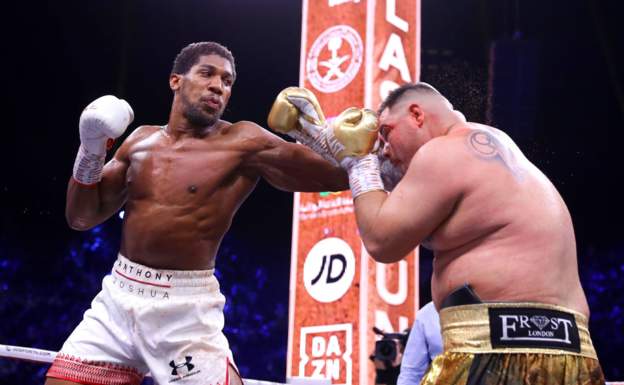 After 12 rounds of fight at the 15,000-capacity Diriyah Arena in Saudi Arabia, Joshua was announced the winner by unanimous decision.

The Briton dominated throughout the encounter thanks to a composed tactical performance which led to him regaining the WBA, IBF and WBO heavyweight world titles that he lost in June when he fell to a shock defeat to Ruiz.

Ruiz never looked close to landing a knockdown in the rematch, and was given a cut by Joshua in the first round.

“This is about boxing, I am used to knocking people out, but last time I got hurt, so I gave the man his credit, said I would correct myself again, I respect Andy so much,” said Joshua, who had never lost a fight before his defeat to Ruiz.

Read Also: Boxing officials from Rio 2016 to be banned from Tokyo 2020 Olympics

“The sweet science of this sport is about hitting and not getting hit. Never a change in mentality, you know the saying ‘stay hungry, stay humble’ – I am hungry and I am humble,” he added.

Mexican-American Ruiz, who weighed more ahead of the fight, said: “It was his (Joshua’s) night. I didn’t prepare how I should have.

“I gained too much weight. I don’t want to give excuses, he won. He boxed me around. If we do a third fight you best believe I’m going to get in shape. I’ll be in the best shape of my life.”

It is yet to be known whether there would be a third match between both professionals.