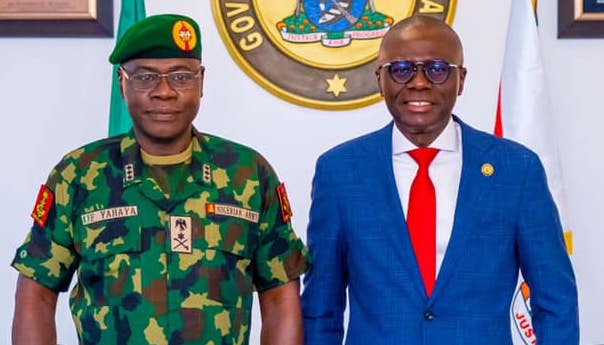 Lagos State Governor, Babajide Sanwo-Olu, on Monday charged military personnel to remain fully committed to their constitutional responsibilities of maintaining peace and security in the state.

Sanwo-Olu made the call when the Chief of Army Staff, Lt.-Gen. Farouk Yahaya, paid him a courtesy visit at the State House, Marina.

The army chief was in Lagos for the traditional assessment of the military formations and warfare assets in the state.

The governor said the state government would not waive its mandate on the provision of logistics support to all security agencies for continuous operations across the state.

He, however, urged the personnel to justify the confidence with improvement in security.

Sanwo-Olu said that it was important for the government and security agencies to prioritise safety in the state given its economic importance and location as one of the country’s international borders.

He said: “Lagos has uniquely not only the land borders, it is also an international route in and out of the country through the air and waterways.

“The relationship we have been enjoying between the state government and the entire security agencies, especially the Nigerian army, has been commendable.

“I acknowledge the leadership role being played by the General Officer Commanding (GOC), 81 Division, with other security agencies in raising the bar of security surveillance, training, information sharing, and collaboration in operations.

“From this robust engagement, we have developed a mechanism in which every agency works in synergy with others to improve the state’s security architecture.

“We have continued to experience improved security, calmness and safety. But there is much that needs to be done and this requires total commitment of our personnel.

“We will continue to give support to the security agencies to ensure not only their safety and that of the residents, but also the safety of visitors coming to do business in Lagos.”

In his remarks, Yahaya expressed happiness at the robust collaboration existing between the army and other security agencies in Lagos.