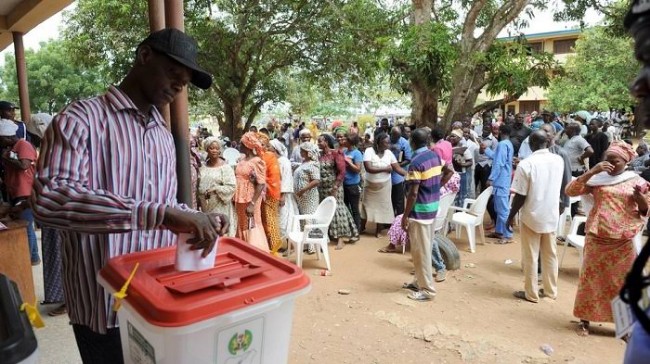 This was contained in a memo addressed to the INEC Chairman, Professor Mahmood Yakubu, in the aftermath of the Ekiti governorship elections.

Kolawole Oluwadare, the SERAP Deputy Director who issued the memo, urged INEC to “promptly and effectively prosecute those arrested, and bring to justice anyone who sponsored, aided and abetted them.

“Corruption of the ballot box intrudes on the freedom of Nigerian voters to make up their own minds. Vote buying and other forms of electoral corruption freeze out the less wealthy candidates and parties.

“Wealthy candidates and their sponsors ought not to be allowed to profit from their crimes. We are concerned that impunity for vote buying and electoral bribery is widely prevalent in Nigeria, as perpetrators are rarely brought to justice.”

The organisation also cautioned that vote-buying encourages poor governance and weakens citizens’ capacity to hold their ‘elected officials’ accountable for their actions.

“Your commitment to these issues will demonstrate to the voters that INEC is ready, willing and able to combat vote buying and electoral bribery and reassure Nigerians that INEC will do everything within its mandates to ensure that the 2023 general elections are not tainted by corruption.

“Ending impunity for vote-buying, undue influence, ballot snatching, intimidation, and other electoral malpractices would contribute to free and fair elections and show that INEC would not tolerate these illegal practices during the 2023 general elections,” SERAP addressed the electoral body.

It further noted that “There are reports of a brazen pattern of vote-buying and electoral bribery in several polling units during the just concluded Ekiti governorship election. There are reports of bargaining prices for votes and payments made in uncompleted buildings and bags of foodstuff being shared after votes have been cast.”

“Acting swiftly to address the brazen impunity and reports of vote-buying and electoral bribery and other electoral offences during the Ekiti state governorship election would also send a strong message to politicians that INEC under your watch would not tolerate such practices during the 2023 general elections.

“Prosecuting allegations of vote-buying, undue influence, ballot snatching, intimidation, and other electoral malpractices during the Ekiti state governorship election would be entirely consistent with the Nigerian Constitution, the Electoral Act, and the country’s international human rights anti-corruption obligations.

“We would be grateful if the recommended measures are taken within 7 days of the receipt and/or publication of this letter. If we have not heard from you by then, SERAP shall consider appropriate legal actions to compel INEC to comply with our request in the public interest.”

Related Topics:#featuredINECSERAP Ekiti election
Up Next