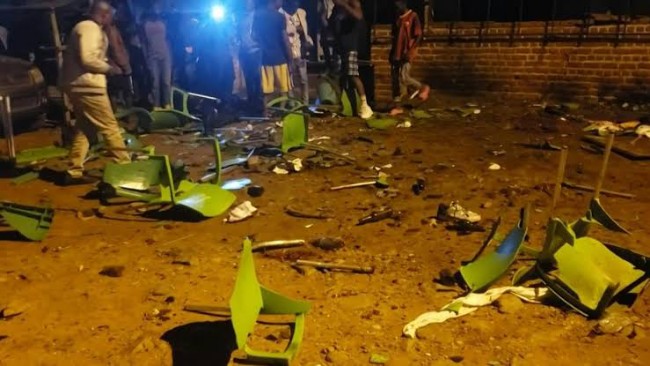 Six people have been confirmed killed as a suicide bomber struck a packed restaurant in Beni city near the Democratic Republic of Congo’s eastern border with Uganda.

The lone suicide bomber reportedly targeted the restaurant on Saturday as families gathered to enjoy the yuletide, killing at least five people and himself.

Officials have already blamed the Allied Democratic Forces (ADF) for the attack, saying the militia was one of the deadliest armed groups in the region and is claimed by the ISIL (ISIS) group as its central Africa arm.

“The suicide bomber, prevented by security guards from entering a crowded bar, activated the bomb at the entrance of the bar,” the regional governor’s spokesman, General Ekenge Sylvain, said in a statement shortly after the attack.

“Six people died in the blast, and 14 were injured, including two local officials,” Sylvain added.

READ ALSO: Suicide bomber blows self up in Ebonyi

“More than 30 people were celebrating Christmas there when the bomb went off, a local journalist said.

An eyewitness, Rachel Magali, told reporters she had been at the restaurant for about three hours with her sister-in-law and several others when she heard a loud noise outside.

“Suddenly we saw black smoke surrounding the bar and people started to cry.

“We rushed to the exit where I saw people lying down. There were green plastic chairs scattered everywhere and I also saw heads and arms no longer attached. It was really horrible.”

The city’s mayor, Narcisse Muteba Kashale, earlier told local radio that a bomb had exploded in the city centre.

“For safety, I’m asking the population to stay home,” the mayor said.

Kashale, who is also a police colonel, said at least two of the victims were children.

Related Topics:DR Congosuicide bomber
Up Next