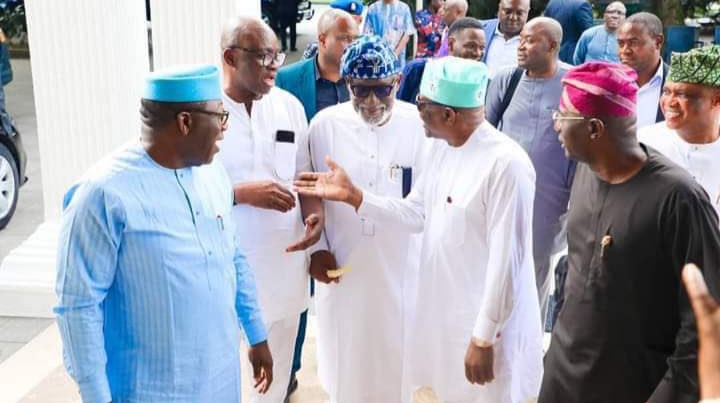 Governors Kayode Fayemi of Ekiti, Rotimi Akeredolu of Ondo, Babajide Sanwo-olu of Lagos and and ex-Ekiti Governor Ayodele Fayose met with Wike in what is perceived as an attempt to woo the Peoples Democratic Party (PDP) chieftains.

Ripples Nigeria recalls that Wike made unsatisfactory remarks after failing to pick the PDP ticket for the coming presidential election.

The meeting between the political weights has gotten Nigerians speculating.

Breaking: Governor Wike receives APC Governors at his Port Harcourt residence as talks to enlist his support continues. Governors Kayode Fayemi of Ekiti State, Babajide Sanwo-Olu of Lagos , Rotimi Akeredolu of Ondo and other dignitaries were there to plead on behalf of APC. pic.twitter.com/dDCdH9c1Sa

Go & Verify the agenda of their meeting. pic.twitter.com/U81sxsisHU

Wike appears to be the most coveted bride in this election 🤭 pic.twitter.com/FZ04eNFuXR

If you look this video very well, it’s been long Wike look this happy.

Fayose had to ask him, why did you come with camera. 😅 pic.twitter.com/p6V0Joub6z

I told you something is cooking and to observe the change of cap by Wike, didn't I? Anyway, politics is not social media mob or abusing people for their choice. Politics is calculation, bridge building and making alliance. Governors Fayemi, Akeredolu and Sanwoolu met Wike♾️ pic.twitter.com/eum24TSB5d

A lot of you don't understand this game. Wike is not leaving PDP neither will any of his fellow Governor Supporters. It will be a case of the insects that lives inside vegetables eating the vegetables.

Mr Obi, on Friday, finally unveiled the former Senator as his running mate ahead of the 2023 General Election.

Ripples Nigeria had earlier reported that Doyin Okupe, who was the placeholder, had announced the submission of his withdrawal letter to the electoral body, INEC.

Senator Yusuf Datti Baba-Ahmed is an economist and founder of Baze University in Abuja.

The Kaduna-born Muslim also served as a senator for Kaduna North from 2011 to 2012 under the PDP.

The new development has gotten many Nigerians talking.

The way every Nigerian will be laughing after 2023 presidential election👇🏽 Amen to a new Dawn. A new Nigeria is here. Emi lokan Nigeria.

I am succeeding in convincing my people that a Christian is not a disbeliever using the Holy Books. Jesus is in the Quran, so is Abraham who is at the top of both our lineages. – Dr. Yusuf Datti Ahmed

Yusuf Datti Ahmed is knocking buhari on Channels tv . He called him a "so called Leader". It is like our VP is in the vawulent department 😂😂😂
Great interview 🔥🔥👏👏 #Obidatti2023 #ObiAhmed

Read Also: SocialMediaTrends: What Nigerians are saying about Kuje prison attack and other stories

Nigerian lawyer and human rights activist, Reno Omokri has been trending on Twitter over his remarks on Peter Obi.

A section of Nigerians on social media have been calling for the ban of Reno on Twitter app.

The petition has been registered on change.org and has, at the time of filing this report, garnered more than 53,000 signatures to effect the ban.

“While his Obidients are applauding that interview, if you watch it with an unbiased mind, you see that Peter Obi considers himself a pilot and Kwankwaso a mere driver and substitute player. The people of Kano heard that. The North heard that. Others Nigerians heard! #TableShaker,” Reno’s tweet reads.

Reno in a later tweet had announced threat to his life.

According to the tweet, “The threats are too much. My life is at risk. If anything happens to me, my wife, my children, or siblings, the world should hold Peter Obi responsible.

“He has raised a horde of intolerant and violent Obidients who just want to replace Buhari’s tyranny with theirs!
#TableShaker.”

While his Obidients are applauding that interview, if you watch it with an unbiased mind, you see that Peter Obi considers himself a pilot and Kwankwaso a mere driver and substitute player. The people of Kano heard that. The North heard that. Others Nigerians heard!#TableShaker

The threats are too much. My life is at risk. If anything happens to me, my wife, my children, or siblings, the world should hold Peter Obi responsible. He has raised a horde of intolerant and violent Obidients who just want to replace Buhari’s tyranny with theirs!#TableShaker

Face of a bigot. He's inciting ethnic hatred in Nigeria from the US. Say no to bigotry
#banRenoOmokri pic.twitter.com/BV5XowsqCA

We don't want a repeat of Rwanda's Tutsi and Hutu story in Nigeria. Reno's manipulative tweet is capable of causing a genocide in Nigeria hence the call for the Ban. His tweets has the ability to incite the Hausa's against the Igbo's. https://t.co/ArWIqBK3qO #banRenoOmokri pic.twitter.com/WdNbyWyW3n

Ban Reno Omokri. He is a threat to our national peace. Much blood has been wasted already. We can't endure more. Meanwhile he is hiding in the US and inciting the Norths against the South, #BanRenoOmokri

Reno has the right to support his candidate but this right here 👇🏻 inciting the North Against the SOUTH and calling on a tribal war on the Igbos reach to #banRenoOmokri pic.twitter.com/48pqSgvXqf

Deji, You're dangerous, hypocrisy. Reno Omockery deserve it. He is Jobless, rude and arrogant. What do you call kaduna group wrote Facebook about Reno Omockery? #banRenoOmokri pic.twitter.com/oyKcpHlzyN