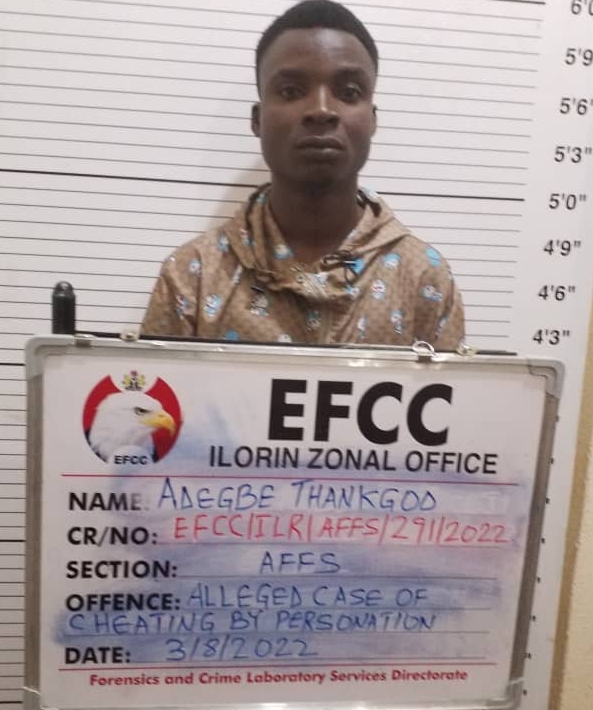 They were convicted on Thursday, September 8, 2022 after pleading guilty to two count-charges bordering on retention of proceeds of unlawful activities, based on their arraignment by the Ilorin Zonal Command of the Economic and Financial Crimes Commission (EFCC).

Count two of the charges against Taofeek reads:
“‘That you, Shekoni Kayode Taofeek sometime between 13th January, 2022 and 22nd August, 2022 at Ilorin, within the judicial division of the High Court, did knowingly had under your control, the gross sum of N14,606,100 (Fourteen Million, Six Hundred and Six Thousand, One Hundred Naira Only) being part of the gross sum of N54,194,680.00 (Fifty Four Million, One Hundred and Ninety Four Thousand, Six Hundred and Eighty Naira Only) deposited in your Sterling Bank account number 0058929473 which is reasonably suspected to be unlawfully obtained and thereby committed an offence contrary to and punishable under Section 319(a) of the penal code”

Count one of the charges against Damilare reads:
“That you, Shekoni Habeeb Damilare between 30th March, 2022 to 23rd August, 2022 at Ilorin, Kwara State within the jurisdiction of this Honourable Court, did knowingly had under your control, the gross sum of N2,526,144.00 (Two Million, Five Hundred and Twenty Six Thousand, One Hundred and Forty Four Naira Only) in your account number 2136057626 with the name: Shekoni Habeeb Damilare domiciled with the United Bank of Africa Plc which you knew to be proceeds of criminal conduct and thereby committed an offence contrary to and punishable under Section 319(a) of the Penal Code”.

The defendants pleaded guilty to their respective charges when they were read to them.

Upon their pleas, counsels to the EFCC, Innocent Mbachie and Aliyu Adebayo, reviewed the facts of the cases and prayed the court to convict them accordingly.

Justice Yusuf, thereafter, convicted and sentenced Taofeek and Damilare to six months imprisonment each. While Taofeek’s sentence was without an option of fine, Damilare was given an option of fine of N100,000.

Justice Sani also convicted and sentenced Thankgod to three years imprisonment on each of the two-count charges of cybercrime levelled against him by the EFCC.

The judge gave the convict an option of fine of N300,000 (Three Hundred Thousand Naira Only) on count one, while no fine was awarded on count two. In addition, the judge ordered the forfeiture of a landed property, one Toyota Camry car, an iphone 13 and Samsung phone used by the convict to commit the crime to the Federal Government.