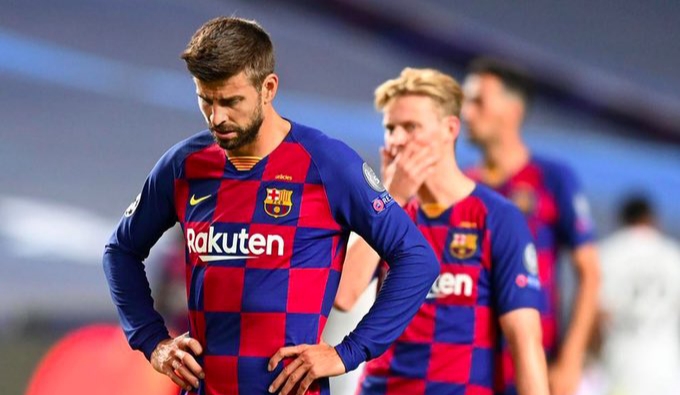 Pique played the entire 90 minutes on Friday night as Barca fell to a horrible defeat to Bundesliga champions, Bayern in Lisbon.

The quarterfinal clash, which was a one-legged tie, saw the Spanish giants concede eight goals and replying just twice.

Bayern secured a place in the semifinal, to face either Manchester City or Olympique Lyon, who play on Saturday in the last quarterfinal clash.

Speaking to Spain’s Movistar after the game, Pique said: “I’m in pain. We all are. We can’t compete like that. It’s very, very tough to take. Nothing more is worth saying.”

Read Also: Barcelona out of Champions League after 8-2 humiliation by Bayern

He added: “The club needs changes. Not just the players, I don’t want to point out anyone.

“But football is a sport where change is constantly required. We must change the dynamic we are on because I believe we have just hit bottom.

“Is it an end of an era, I’m not sure? But I know that we must accept that we have hit bottom. Not just players the but, as a club, we aren’t on the right road.

“This was a horrible game… it’s a dreadful feeling. It’s shameful. Structurally we need changes at all levels.”

Their exit in Europe means Barcelona failed to win any trophy this season, having also bottled their lead in the La Liga as rivals Real Madrid emerged champions.