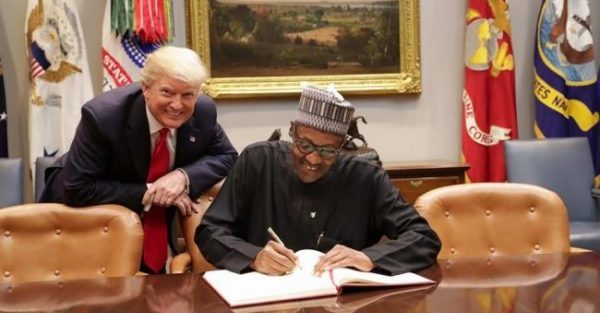 President Donald Trump of the United States of America (USA) on Monday told President Muhammadu Buhari of his government’s position on the incessant killings in Nigeria.

He said that the US government was not happy with the killing of Christians in Nigeria and that he was going to look into the problem.

“We have met before, we have a great relationship. I look forward to our discussion today again, especially as it relates to terrorism.

“Terrorism here, terrorism all over the world is a hotbed and we are going to be stopping them.

“Also, we have had very serious problems with Christians who are being murdered in Nigeria. We are going to be working on that problem very, very hard because we cannot allow that to happen,” he said.

Noting that his government had decimated ISIS over the last 12 months, Trump said that Boko Haram had been terrible.

He afterwards asked Buhari about his government’s handling of abduction of schoolgirls.

In his response Buhari said, “Chibok girls’ kidnap was before we came. We rescued some of them.

“The Dapchi girls were 106, we rescued 100 back, four died, one is still in captivity. We are very grateful to the United Nations that is acting as a go – between and is helping out. We have not given up on the Dapchi girl.”

He added, “On security, I am very grateful to the United States for agreeing to sell to us the aircraft we asked for and the spare parts.

“We are even more grateful for the physical presence of the United States military who are training in our institutions and who also go to the front in the North East to see how they are doing.

“The commitment of the United States to get rid of terrorism across the world, we have first hand experience of that and we are very grateful for it.

“The problem of cattle herders is a very long historical problem. What is of concern is that before now the Nigerian herders are known to carry sticks and machetes and cut follies for their animals but these ones are carrying AK 47.

“We are doing our best to make sure we stop the cross border movement and so on. It will take time.

“We are happy with the United States trying to see the end of ISIS. This has helped us a lot because the Boko Haram in Nigeria had one time made a statement that they belong to ISIS.

“Now that ISIS has been virtually gone we are very happy with that. We are stabilising the situation in Nigeria”, President Buhari assured.

Buhari in meeting with Trump