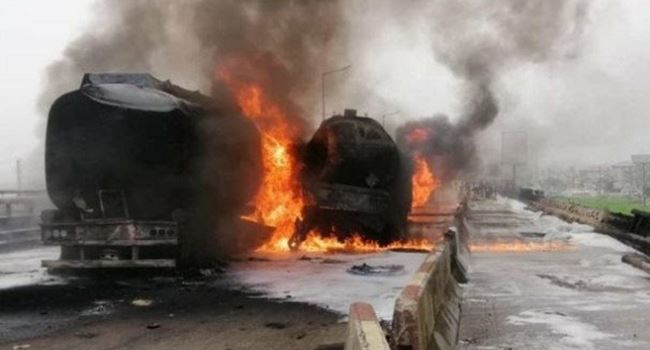 Five persons were burnt beyond recognition in the early hours of Wednesday, after a petrol tanker exploded on the ever busy Lagos-Ibadan expressway.

The mishap, according to eyewitnesses, occurred around the Kwakyama axis of Ogere, Ogun State, opposite a fuel station called Tunji Alegi Filling Station, in the area.

The petrol-laden tanker was said to have crashed into a parked truck which led to it spilling its content and went up in flames, consuming the victims in the process.

Not less than 10 vehicles were also said to have been burnt in the inferno.

Confirming the incident, Public Education Officer of the Federal Road Safety Corps (FRSC) in Ogun State, Florence Okpe, said the tanker had collided with another truck which led to a fire outbreak.

She blamed the incident on “wrongful overtaking and dangerous driving” on the part of the tanker’s driver.

Okpe added that corpses of the victims were recovered from the crashed trucks and deposited at a morgue in Ipara, Remo North Local Government Area.

“A total of five persons were burnt beyond recognition.

“They were recovered from one of the crashed trucks and have been deposited at FOS Morgue Ipara.
Further updates soon,” she said.

Okpe also said traffic along the route had been diverted to avoid a secondary crash, and advised commuters to remain calm and cooperate with traffic managers.

Police arrests 12 over killing of CSP Abonde, suspects to be arraigned in court today