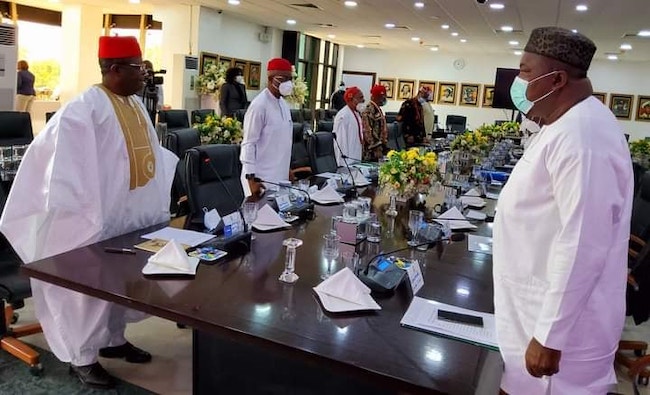 South-East governors and leaders from the region including the Ohanaeze Ndigbo and monarchs met on Sunday to find a lasting solution to worsening security situation in the zone.

It was the second meeting by the South-East leaders on the security challenges in the region this month.

In a communiqué issued at the meeting held in Enugu, the leaders agree that the newly established South-East security outfit, Ebubeagu would work with the police and other security agencies to protect lives and properties in the region.

They also set up the structure and operational modalities for the outfit.

Imo State was represented by the Deputy Governor, Placid Njoku.

Also at the meeting were the President-General of Ohanaeze Ndigbo, Prof, Obiozor; the Obi of Onitsha, Alfred Nnaemeka Achebe, Archbishop of Enugu Ecclesiastical province, Archbishop Emmanuel Chukwuma; Chief Emmanuel Iwuanyanwu, and Chairman of Christian Association of Nigeria (CAN) in South-East, Bishop Goddy Okafor; among mothers.

The South-East leaders also set up an Adversary Board for the security outfit and directed the Attorney Generals and Commissioners for Justice in the region to work with the Joint Security Committee and come up with the amendment of existing laws to accommodate the new outfit.

Related Topics:insecuritySouth-East governors
Up Next