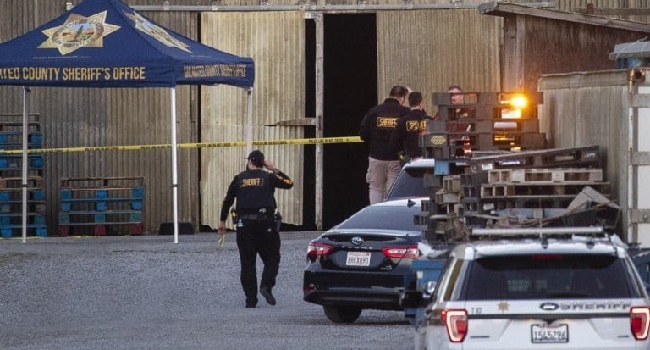 Barely two days after a mass shooting at a park in California where 11 people were killed during a Chinese Lunar New Year celebration, seven people were on Monday, killed in two related shootings in a coastal community south of San Francisco.

The new shooting occurred at an agricultural facility in a California coastal community where an Asian farm worker reportedly opened fire at the facility.

The San Mateo County Sheriff, Christina Corpus, who briefed reporters after the shooting, said the shooter, a 67-year-old Chinese farm worker, Chunli Zhao, was arrested after he was found in his car in the parking lot of a sheriff’s substation.

“The suspect is a worker at one of the facilities and the victims were workers as well. Some workers at one facility lived on the premises and children may have witnessed the shooting.

“Four people were found dead and a fifth injured from gunshot wounds at a farm, and officers found three other people killed at another location several miles away,” Corpus said.

“The killings occurred on the outskirts of Half Moon Bay, a city about 30 miles (48 kilometers) south of San Francisco. The two locations were nurseries, and it wasn’t immediately clear how they were connected,” he added.

The Monday shooting brings to six the string of mass killings in the United States since the New Year, with 39 deaths recorded.